This is the dramatic moment a brave shopkeeper fended off a knife-wielding robber by throwing cans of drink at him.

CCTV footage shows 33-year-old Raymond Wilson enter the off-licence in County Durham and point a blade at the shopkeeper.

But instead of handing over cash, the shopkeeper can be seen throwing bottles and cans of drink at the would-be robber’s head.

Unable to withstand the barrage, Wilson backs out of the door and flees down the street, chased by the shopkeeper. 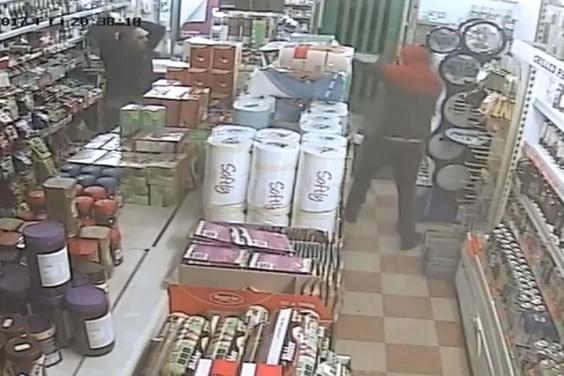 Confrontation: the shopkeeper refuses to hand over cash and instead throws bottles and cans (Durham Constabulary)

The incident occurred at News and Booze in Stanley on March 31.

Wilson was jailed for nine years at Durham Crown Court after pleading guilty to attempted robbery and threatening a person with a blade in a public place.

PC Luke Terry, from Consett CID, said: “The shopkeeper was quietly going about his business when he was confronted by Wilson brandishing a knife.

“No-one should be put in such a situation and we are pleased that as a result of our investigation we have taken a dangerous man off the streets.”