A moped gang has been caught on camera smashing into a west London luxury bike dealership and wheeling out a rare superbike worth £28,000 before riding off on it.

The bike, a H2 Carbon Kawasaki, is a limited edition model and one of only six in the UK and 120 in the world.

The rare motorbike had been acquired by Daytona Motorcycles for a specific customer and was being held for collection.

The gang – travelling on three scooters – were caught on camera entering the premises, in Ruislip Manor, just after midnight on Tuesday. 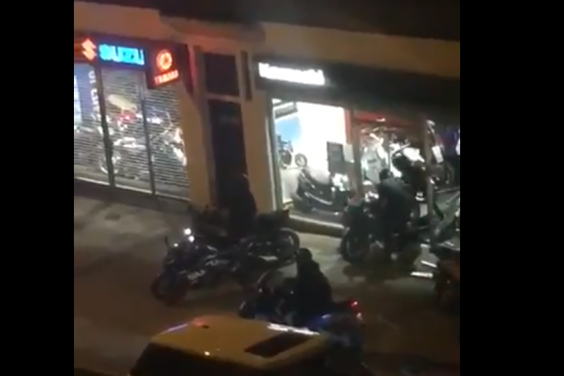 Footage: Video shows the gang wheeling the bikes out of the shop

After disabling the shutters and ramming through the glass doors, the suspects moved several less-expensive bikes out the way before getting their hands on the Kawasaki.

Jack Rayment, who works in the shop, told the Standard: “They moved four bikes out the way until they could get this specific one off its plinth. They knew exactly what they were looking for.”

Speaking about the limited edition bike, he said: “It is quite hard to get the chance to buy one. The customer had been waiting a while.

“Any biker or anyone who knew anything about bikes would immediately recognise it. This is why we are trying to get as much information out there as possible.”

As well as the bike, the gang took three crash helmets, worth £600 each, and another bike which they dumped around the corner from the store.

Police in Hillingdon arrived at the scene just moments before the thieves made off towards Victoria Road.

A Met spokesman said: “Around five suspects, all riding mopeds and wearing dark clothing and crash helmets, forced entry to the shop by damaging the front shutters and door at around 00.50am on Tuesday July 18.

“Two motorcycles and other items were stolen. One was found abandoned nearby.”

Anyone with information is asked to call police on 101, Tweet @MetCC or call Crimestoppers anonymously on 0800 555 111.