The 17-strong group targeted Three stores, smashing their way in at night and snatching up thousands of pounds’ worth of handsets in minutes.

They used mopeds to get to and from the raids, attacking security guards who got in their way and injuring two police officers who tried to thwart one of the break-ins.

Blackfriars crown court heard one of the gang bragged about attacking a guard with a claw hammer when a raid turned violent, texting a friend: “Lol, had to lick him up with a hammer.”

They even carried out a “brazen” break-in on a Three store in Oxford Street, threatening members of the public with a gun as they helped themselves to £20,000-worth of phones, it is said. 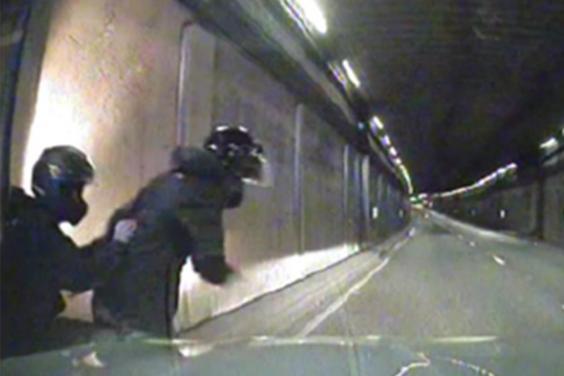 Members of the gang seen on a dashboard-mounted camera

The court heard three of the group were caught after a dramatic police chase through London, as a Met helicopter tracked a convoy of mopeds fleeing from the scene of the gang’s penultimate raid.

Prosecutor Michael Shaw said police recovered a series of “trophy” selfies taken by the alleged robbers before they went on the raids.

“They armed themselves with weapons, knives, hammers and guns, arriving on mopeds and using crash helmets as a disguise,” he said. 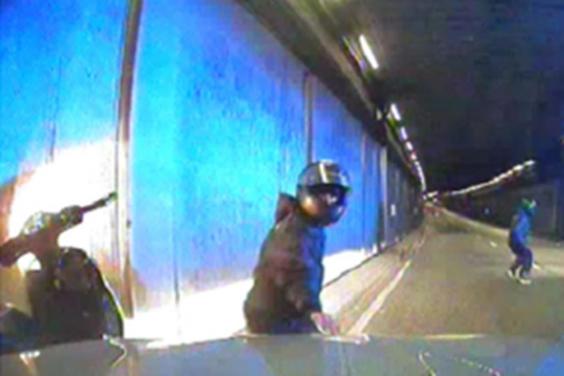 The court heard the estimated value of the stolen phones together with damage caused to the shops is about £1 million.

Dylan Castano-Lopez, 19, of Rust Square, Camberwell, Alfie Kennedy, 20, of Arlington Avenue, Hoxton, and Adam Atallah, 21, of no fixed address, have pleaded guilty to conspiracy to burgle, admitting they belonged to the gang.

Kennedy’s brother, Bobby, 22, and Chris Costi, 19, of Linscott Close, Clapton, deny being part of a conspiracy, between May and November last year, and are currently on trial. Other alleged members of the organised crime group are due to stand trial at a later date. 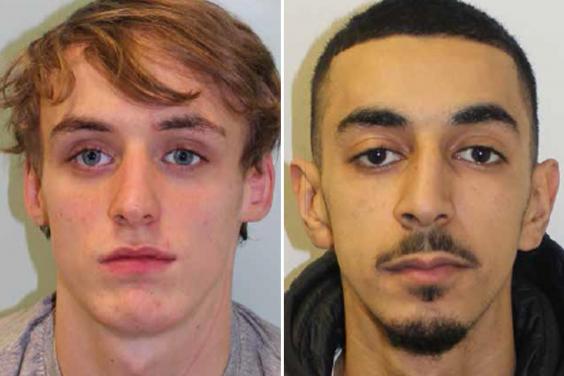 Trapped: Alfie Kennedy, left, and Adam Atallah were caught as they tried to flee from police through an underpass in west London. They admitted conspiracy to burgle

Mr Shaw said the gang were caught on CCTV using a fence post to smash their way into the shops, and were “prepared to use considerable violence when they come across security guards or police officers”.

On July 6, 2016, a security guard was subjected to “a good kicking” when he came across men in dark clothes and wearing crash helmets smashing their way into his shop in Walthamstow.

“The males forced their way in to his room where he was hiding,” said Mr Shaw. “They said ‘don’t call the police’ and they set about kicking him. He wasn’t resisting … but they laid into him with the hammers and they gave him a good kicking.”

The court heard another guard was hit over the head with a chair and beaten with a hammer at a Three store in East Ham, and a third man who managed to barricade himself in a back office during a raid was told he would be shot if he dialled 999.

Police officers were also injured after catching two of the robbers “red-handed” on August 17 last year at a break in in Wood Green. “There’s a fight and the officers are dragged out through the broken window, receiving a number of lacerations,” said Mr Shaw.

He told the jury the group, which changed personnel for each “job”, broke into the Three store in Oxford Street at 2.40am on September 29, threatening to shoot any members of the public who tried to intervene.

Police eventually learned the gang had a pattern, fleeing back to their “turf” in north London and fencing the stolen loot through a shop in east London. He said the Kennedy brothers and Atallah were caught after being pursued from a break-in in Walthamstow to the Hanger Lane underpass in west London, where they tried to flee on foot but were trapped by officers.

Costi and Bobby Kennedy deny conspiracy to commit aggravated burglary and an alternative of conspiracy to rob. The trial continues.