A mother who became a quadruple amputee after a blood infection nearly killed her will compete in her first triathlon this weekend.

Corinne Hutton, 47, was hit by acute pneumonia and septicaemia — leading to her losing her legs below the knee and both hands. She was given a five per cent chance of surviving.

But four years on, she has entered Saturday’s AJBell Triathlon to raise money and awareness for her Find Your Feet charity.

She said: “There is a lot of therapy in doing this and instead of thinking what you cannot do, you have to do things that make you laugh and feel positive. At the end of March I had two thirds of a lung taken away because it was so badly scarred from my illness.”

Following surgery, Ms Hutton learned how to walk on prosthetic legs, relearned to ski and was the first female quadruple amputee to scale Ben Nevis. She is hoping to become one of Britain’s first double hand transplant recipients. 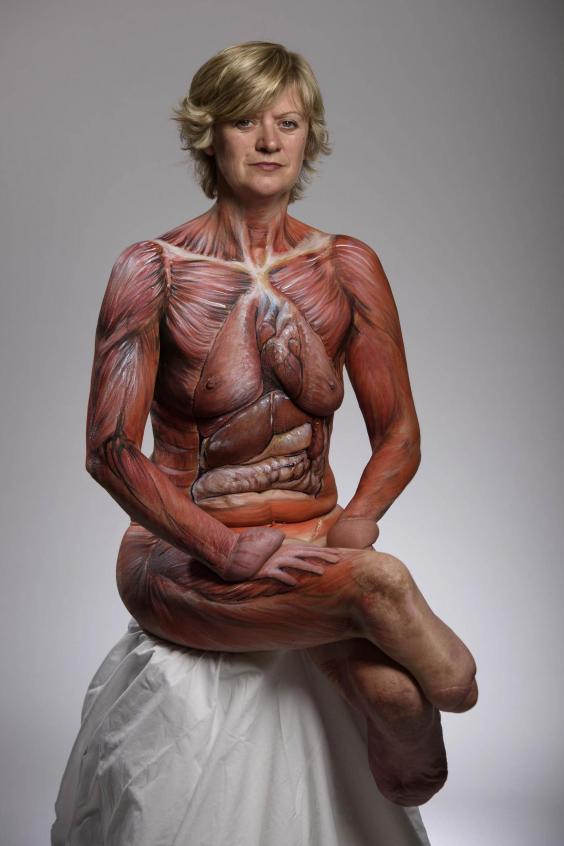 Last year a nude image of her with organs painted on her skin was projected on to Waterloo station. (John Linton/FInding Your Feet)

She is entered in the super sprint event for the AJBell, which comprises a 400m swim, a 2km run and a 10km cycle. She said: “I don’t like failing at things and I’m determined. If I say I’m going to do something then I will do it.”

Last year a nude image of her with organs painted on her skin was projected on to Waterloo station and the Royal Opera House as part of a campaign to encourage more organ donors.

Ms Hutton has just published her autobiography to encourage other amputees to embrace new challenges. Her charity supports amputees by organising community events around the country after it was launched in her native Scotland.