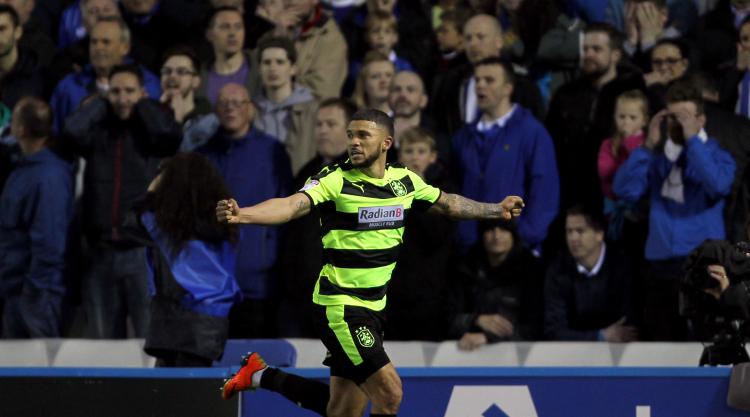 Nahki Wells has backed Huddersfield to win promotion to the Premier League after seeing off Sheffield Wednesday on penalties in the Sky Bet Championship play-off semi-final.

Terriers keeper Danny Ward saved spot-kicks from Sam Hutchinson and then crucially from Fernando Forestieri to send his side through 4-3 on penalties after the sides had finished 120 minutes locked together at 1-1 at Hillsborough.

Wells won promotion to League One while at Bradford in 2013 and the Huddersfield striker is hopeful ahead of his next Wembley date against Reading on May 29.

Speaking to Sky Sports, Wells said: “I’m not going to take anything away from how tough of a task it will be to go to Wembley and win. Reading are still on a high, but we fancy ourselves.

“We created a few more chances, but most importantly we are going to Wembley.”

Steven Fletcher had converted a cross from Barry Bannan to head Wednesday into a 51st-minute lead but the visitors drew level 12 minutes later when a cross by substitute Collin Quaner was turned into his own net by Tom Lees.

“I’m over the moon. I was quite confident anyway when it comes to penalties.”

Ward was suspended for the first leg, with 21-year-old stopper Joel Coleman taking his place in the 0-0 draw at the John Smith’s Stadium on Sunday.

Ward added: “Obviously I was disappointed to miss the first leg but Joel was brilliant. He showed great professionalism for such a young lad.

“It might have been a bitter pill to swallow not being in the team, but us goalkeepers are a strange bunch.

“We train together every day, he’s a top boy, so whoever is between the sticks it doesn’t matter – we back each other to the hilt.”

Huddersfield boss David Wagner, who was appointed in November 2015, was proud of his players’ efforts.

He said: “We were able to manage both legs. At the end, if you play two games and you have to go to the penalty shootout, it says how tight and even the games were.

“I am so proud and happy for our football club. They can celebrate tonight. Huddersfield Town will be at Wembley.

“Huddersfield Town is one game away from the Premier League. Even if I speak about it, it sounds ridiculous, but it is true.”

Sheffield Wednesday boss Carlos Carvalhal was not drawn on his immediate future following the dramatic defeat.

He said: “I don’t talk in this moment. In this moment I want to relax a little and I will sit with the chairman. That’s not a problem, I am not worried about my future.”

On the game, he added: “The teams are similar, little things make a difference. After a lottery of the penalties they win, we must give them congratulations.”