The Duke of Edinburgh’s retirement from royal duties has been marked with the launch of a special commemorative £5 coin.

The reverse of the £5 coin bears the image of Prince Philip and the phrase “Non sibi sed patriae” – Latin for “not for self, but country”, while the other side features the face of the Queen.

Prince Philip, 96, attended his final solo royal engagement on Wednesday in the grounds of Buckingham Palace where he met Royal Marines who had completed a mammoth 1,664 mile trek.

The Queen’s Consort announced in May he would be retiring from royal engagements after more than 65 years supporting the monarch in her role as head of state and attending events for his own charities and organisations.

The Duke of Edinburgh at his last solo Royal engagement (REUTERS)

Buckingham Palace has stressed although the Duke’s diary of engagements came to an end on Wednesday he may decide to attend certain events, alongside the Queen, from time to time.

His son Prince Charles struck the very first commemorative coin during a recent visit to the Royal Mint’s visitor centre in Wales on July 11. 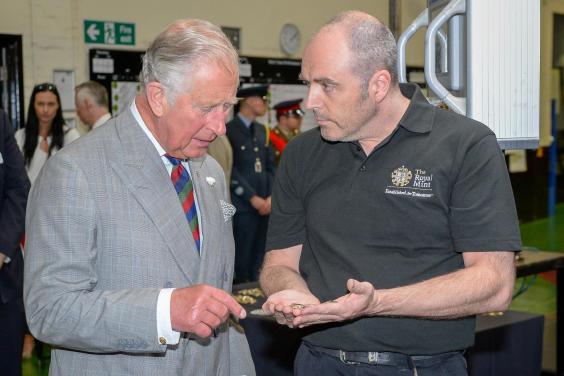 Prince Philip served as President of the Royal Mint Advisory Committee from 1952 until 1999, an unbroken period of 47 years.

Every UK coin and medal produced by The Royal Mint over this time, including four portraits of The Queen, has been discussed and approved by the committee he chaired.

Adam Lawrence, Chief Executive of The Royal Mint, said: “We are particularly delighted that the Prince of Wales struck the very first of the coins that will celebrate the contribution that The Duke of Edinburgh has made to public life.”

The coin goes on sale on August 7 but the public can register their interest now at http://www.royalmint.com/pre-register/prince-philip.