A company has been told to remove its “obstructive” bicycles from a borough’s streets, just days after it launched a cycle-hire scheme to rival ‘Boris Bikes’ in London.

The start-up firm oBike this week became the first ‘dockless’ bicycle hire company to be rolled out in the capital this week.

But one local authority has since told the Singapore-based firm to remove its bikes until a consultation over the way they are placed in streets takes place.

Pictures emerged online of at least one of the bikes carrying a highway obstruction notice served by Hammersmith and Fulham Council after they spotted them in the borough. 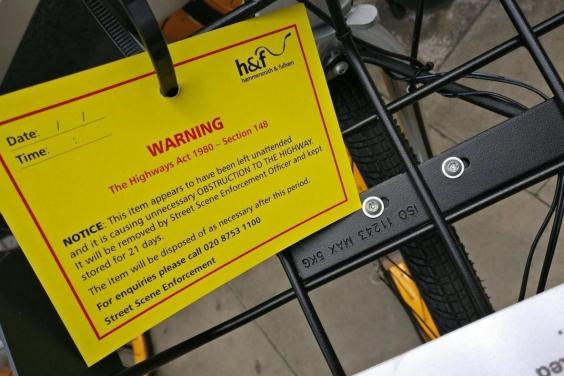 Cycle hire: Hammersmith and Fulham Council placed an obstruction notice on one of the bikes (Michael Passingham trustedviews.com)

The authority has asked oBike to temporarily remove its bicycles over health and safety concerns until a consultation takes place.

A council spokesman said: “We have concerns about the way they had been placed on the streets, and protecting the health and safety of people in the borough.

“Most had been left at right angles to the kerb, partially obstructing the footpath, and creating a potential hazard for pedestrians – particularly the disabled.”

The company has since said it is working with local authorities across the capital to ensure its roll-out is “as smooth as possible.”

An oBike spokesman said the company would “comply” with requests from any council that asks them to remove their cycles from its streets.

He said: “We’re working with councils across London to ensure the roll-out is as smooth as possible, and that oBikes are positioned in places that are convenient for the public, but do not cause an unnecessary obstruction.

“Where councils ask us to move or reposition bikes, we will comply with those requests.”