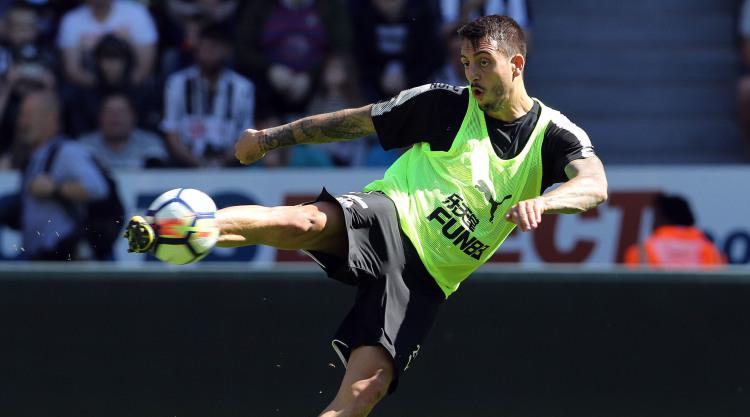 Newcastle boss Rafael Benitez is hoping he can help striker Joselu fulfil the potential he first saw in him as a youngster at Real Madrid.

Benitez made the 27-year-old Spaniard his sixth signing of a difficult summer on Tyneside earlier this week when he sealed a Â£5million switch from Stoke.

Joselu has struggled to reproduce his best form since arriving in the Potteries from Hannover in a Â£5.75million transfer in 2015. He spent last season on loan at Deportivo La Coruna, and his compatriot Benitez is keeping his fingers crossed he can rekindle his career at Newcastle.

Benitez said: “We knew him when he was in the academy at Real Madrid and he was the top scorer. He was doing well.

“Obviously, in Spain, when he was at Deportivo La Coruna, we had some information, and when he was in Germany. We know the player and we know he has the potential.

“Was he playing at his level at Stoke? Maybe not. And can he do it here? Maybe he will have more chances.

“He has the potential to do well for us, but in football you have to wait until the end of the season.”

Benitez has favoured a 4-2-3-1 formation at Newcastle and it was last season’s top scorer Dwight Gayle who got the nod in last weekend’s season opener against Tottenham.

Joselu may have to remain patient with Gayle likely to take the lone role once again at Huddersfield on Sunday, but will Aleksandar Mitrovic having failed to seal a regular place in the team and Ayoze Perez more often than not employed in a deeper role, his chance may come sooner rather than later.

Benitez will have to make at least three changes – with defenders Florian Lejeune and Paul Dummett injured and midfielder Jonjo Shelvey suspended – to face a side against whom the Magpies endured mixed fortunes in the Sky Bet Championship last season.

Alarm bells were ringing when Huddersfield condemned the Magpies to a second defeat in as many games when they headed for Tyneside in August last year, but a 3-1 win in West Yorkshire in March redressed the balance.

Benitez said: “They have spent some money and brought in 10 players, so it will be a different season, a different team.”