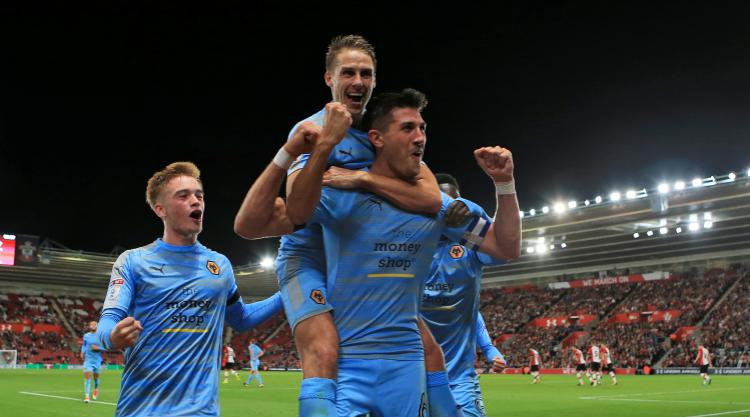 Last season’s runners-up are out of the Carabao Cup as Southampton were stunned 2-0 at home by Championship side Wolves.

Southampton, who lost 3-2 to Manchester United in February’s final at Wembley, fell at the first hurdle this time.

Danny Batth headed in Ivan Cavaleiro’s corner in the 67th minute and substitute Donovan Wilson ran through to make it 2-0 with three minutes left.

Burnley’s 2-0 victory against bitter rivals Blackburn at Ewood Park was marred by fans running on to the pitch.

Blackburn fans confronted Clarets players after Jack Cork headed in Robbie Brady’s cross to give the visitors a 27th-minute lead.

One appeared to push captain James Tarkowski before being tackled to the ground by Ashley Westwood.

The individual was eventually led away by stewards along with the other fan, while a Burnley supporter was also ejected after a flare was set off in the away end.

Brady added a second in the fourth minute of first-half stoppage time to secure a comfortable win for the Clarets.

Elsewhere, Premier League high-fliers Huddersfield had to come from behind to beat Yorkshire rivals Rotherham 2-1.

The League One side took the lead inside the opening minute when Anthony Forde’s cross was headed in by Semi Ajayi.

But David Wagner’s men turned it around with two goals in three minutes early in the second half.

First Philip Billing converted from the penalty spot after Laurent Depoitre was fouled by Will Vaulks, before Joe Lolley added the finishing touch to a flowing move in the 54th minute.

The Hammers took the lead five minutes before half-time when Diafra Sakho slotted in his first goal since November before Andre Ayew added a second three minutes later.

Joe Allen only played 45 minutes but managed two goals and an assist as Stoke eased past League One Rochdale 4-0.

The Wales midfielder headed Stoke into a 16th-minute lead, set up Peter Crouch for the second just before the half-hour mark and added a third with three minutes left of the period.

Ramadan Sobhi struck with 10 minutes left to round off a comprehensive home win.