A rock formation known as ‘Troll Penis’, which is believed to have been targeted by vandals, has been restored to its former glory in Norway.

The penis-shaped appendage, called Trollpikken in the local language, was found snapped off last month.

Drilling holes were reportedly found, suggesting the popular tourist attraction may have been deliberately targeted.

The protuberance, which weighs 12 tonnes, had to be hoisted 33-feet using scaffolding before cement, glue and metal fastenings were used to re-attach it. 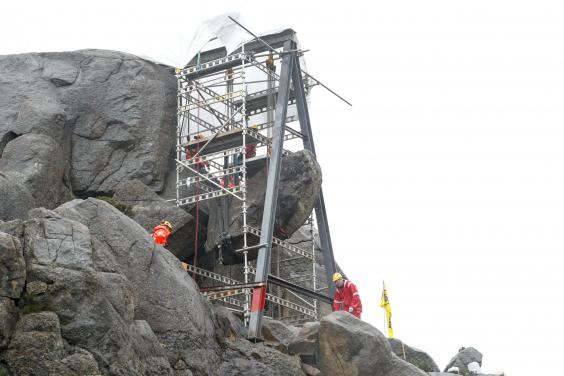 Locals raised more than £20,000 to have the rock in Eigersund, near Oslo, restored.

Hikers had found the stone, which originally came out from the rock face, resting on the ground.

Police are investigating and have appealed for information on who may have been responsible. They say a suspect has been questioned over the incident.

But tourists will have to wait a week before they can see the formation in order to allow it to fasten properly.