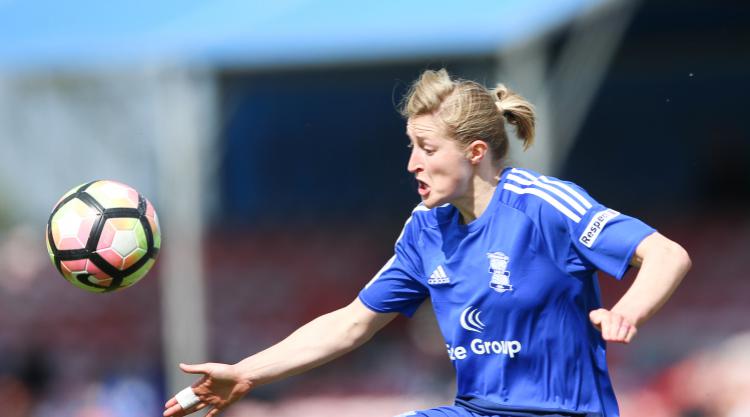 Ellen White has highlighted the fragile state of women’s professional football as she prepares for the showpiece club match of the English season.

The England striker will line up at Wembley on Saturday for Birmingham City Ladies against Manchester City Women in the SSE Women’s FA Cup final.

A record crowd is expected, beating the 32,912 that saw Arsenal beat Chelsea last year, and it should be a celebratory occasion. But the match is also played against a backdrop of testing times for the women’s game.

After the euphoria of scoring England’s winner against world champions the United States in March, it jolted White six weeks later to learn her former club Notts County Ladies had folded on the eve of the Women’s Super League season.

She only left County in January. For the team-mates and friends who remained, the pain was far worse.

The timing of the announcement accentuated the shock, but it came with the club reporting projected seasonal income from attendances and sponsorship of just £28,000, against costs of around £500,000.

“It just shows the fragility of the game, and hopefully we can do something to help progress it and help it to be sustainable,” White said.

The cup final represents one opportunity to promote the women’s game to a national audience, given the live terrestrial television coverage and free match tickets for children encouraging footfall along Wembley Way.

But it may be England’s performance at Euro 2017 this summer that proves pivotal for the long-term prospects of the WSL clubs fighting to balance their books.

“We’ve got a chance, a big responsibility.

“We really want to be successful and we want to promote the game, and hopefully with England we can put in a really good performance and help the game to grow. But everyone in the league has a responsibility to do that as well.”

White was “absolutely devastated” for the Notts County Ladies players and staff when they were suddenly put out of work.

Telford, Moore and Potter swiftly found new clubs. Others, including England internationals Bassett, Amy Turner and Rachel Williams, have yet to reappear.

On the pitch, White is relishing taking on her great friend Steph Houghton at Wembley.

Houghton, captain of Manchester City and England, should start at centre-back and be in direct competition with White.

“She’s a fantastic player and a really close friend of mine as well,” White told Press Association Sport.

“As soon as we step on the field we won’t be friends for 90 minutes, but then again afterwards we’ll be best friends again.

“It’s all business once we hit that white line. It’s going to be a very difficult match for us, against top, top players, but it’s one we’ll be fully prepared for.”

Manchester City superstar Carli Lloyd scored twice at Wembley for the United States in their 2012 Olympic final victory over Japan.

Lloyd poses one of many threats to Birmingham.

But White hopes to be lifting the trophy and hitting the back of the net herself, defying opponents who are unbeaten domestically since last season’s FA Cup semi-finals.

This will be the 28-year-old’s fourth FA Cup final, after two triumphs with Arsenal and a defeat to Chelsea with Notts County two years ago.

” I thrive off these moments,” White said. ” For any striker, to score at Wembley is a dream come true. But ultimately I want the team to win. It’s just about getting that cup.”

:: Ellen White was speaking on behalf of Birmingham City ahead of the SSE Women’s FA Cup Final. Kids Go Free to the May 13th Final and tickets are still available via TheFA.com/Tickets