London and south east rail commuters suffer the worst rail service in the country, according to an official survey published today.

Southern, beset by 16 months of strikes, Thameslink, Southeastern and Great Northern all came bottom of the passenger satisfaction list of operators across the UK.

For Southern, just 72 per cent – fewer than three out of four – passengers believed they received a good service; for Thameslink the figure was 75 per cent, Great Northern 79 per cent and Southeastern 81 per cent.

The bi-annual survey, conducted by Transport Focus, the independent rail watchdog, conducts in-depth interviews with more than 55,000 passengers a year to produce the world’s largest survey.

Although most of the London operators saw a percentage increase in their overall passenger satisfaction scores Anthony Smith, the watchdog’s chief executive, told the companies they must do more. 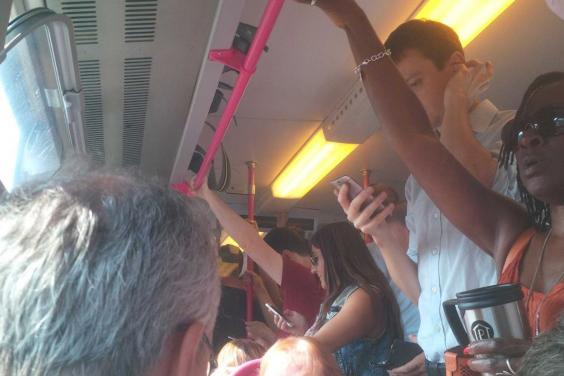 Thameslink trains were also officially named among the worst (@bornatotter/Twitter)

He said: “Passengers using services in London and the South East have seen an improvement with an increase in overall satisfaction from 79 per cent last year to 82 per cent this year.

“The figures for Southern in particular show a significant recovery in passengers’ experience with a number of factors including the helpfulness and availability of on board staff and also of staff at the station. Southeastern also saw their overall satisfaction scores increase by 10 per cent.

“Having said that, there is some way to go reach a more acceptable position. Southern, Thameslink, Great Northern and Southeastern have the lowest scores.

“These green shoots are fragile and need nurturing. This recovery will be under pressure from upgrade works, industrial relationship problems and rising passenger numbers. So the industry needs to keep a relentless, ongoing focus on performance and reliability.”

Key points of the survey, compared with the last six months ago, include: