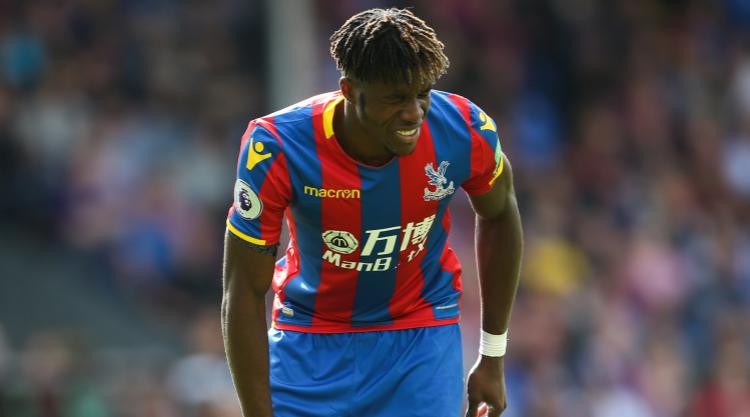 Frank de Boer will not take risks with Wilfried Zaha as the winger begins rehabilitation on his injured knee.

Ivory Coast international Zaha suffered the problem in Crystal Palace’s opening-day defeat to Huddersfield and has missed the last two matches, including the midweek Carabao Cup success over Ipswich.

Palace boss De Boer, whose side entertain Swansea at the weekend aiming for their first Premier League victory of the campaign, is unsure when the 24-year-old will be ready for a first-team return and does not want to rush him.

“Wilf is a very robust player, the first couple of days (after the injury) are very important to have a rest and, from now on, I think he’s going to start rehab,” De Boer said.

“We don’t know how long it will take.

“The risk is that you start too early, that he can have a setback, so we are going to see and don’t put a time on it right now.”

The Eagles lost their opening two league games – at home to the Terriers and against Liverpool at Anfield – without registering a goal.

The mini goal drought was broken against Mick McCarthy’s Tractor Boys on Tuesday and De Boer, who made seven changes for that 2-1 win, feels some of his squad players have made a case to start more regularly.

“I’m very pleased with the spirit that I saw from the players,” he added.

“Some players coming back from injury, some players waiting for their chance and I already said before you have to show yourself and make it as hard for me as possible.

“If I need you then I don’t have to hesitate and I think a lot of players showed that they are ready.”

Saturday’s clash with the Swans will be the final Palace game until after the international break.

The transfer window will close during that time and former Ajax and Inter Milan coach De Boer wants to bring in reinforcements before September 1, although he would not be drawn on specific names.

“We’re looking very hard and if something happens you’re (journalists) the first to hear it,” he said.