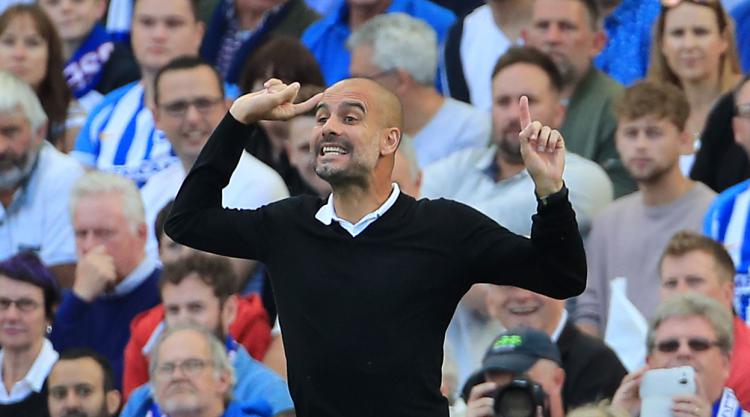 Pep Guardiola believes his Manchester City side are still missing too many chances – but has no doubt the goals will come.

One of City’s shortcomings last season, as they failed to mount a serious Premier League title challenge, was their failure to make the most of openings in front of goal.

Little criticism could be aimed at Sergio Aguero, who top-scored with 33 goals, while Gabriel Jesus showed a clinical eye after arriving in January only to be held back by injury.

But for a side built on attacking principles, the overall return was low.

There have been rumours throughout the summer transfer window that City could move to bring in another forward to address this. However, despite being linked with the likes of Kylian Mbappe and Alexis Sanchez, City’s £200million summer spend has brought in only one attack-minded player, Bernardo Silva.

“I have enough good players up front,” City boss Guardiola said. “(They should) just relax and score goals – that’s all.

“I have two amazing strikers, two number nines, Gabriel and Sergio, but I have others who can score a lot of goals.”

Guardiola said: “Leroy scored goals last season and Kevin De Bruyne is a guy who scores 15 goals (a season). If just half of the posts – chances which he creates himself – scores a goal, it is a step forward.”

City face Everton at the Etihad Stadium on Monday in their first home match of the Premier League season.

Left-back Benjamin Mendy, one of City’s summer signings, is still unable to make his debut due to the thigh injury that hampered him in pre-season. Both the Frenchman and midfielder Ilkay Gundogan, who injured his knee last December, are expecting to be in action in the coming weeks.