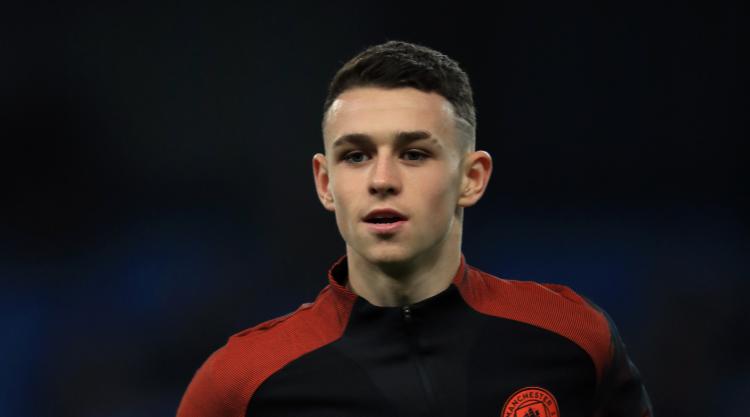 Pep Guardiola has hailed 17-year-old midfielder Phil Foden “a gift” for Manchester City after an eye-catching display against Manchester United in Houston.

Foden, who has been associated with City since the age of six, was handed a maiden first-team appearance when the Manchester rivals met at the NRG Stadium and was among City’s most impressive performers.

United were comfortable 2-0 winners on the day but Guardiola saw plenty to be excited about in a player who scored for England Under-17s in their European Championship final defeat to Spain earlier this summer.

“I don’t have words. I would like to have the right words to describe what I saw,” said the City boss, who is no stranger to emerging talent from his time at Barcelona and Bayern Munich.

“You are lucky guys, believe me, you are the guys who saw his first game in the first team at Manchester City,” he told the assembled press.

“I’ve not seen something like I saw today for a long time. His performance was another level. He’s a City fan and loves the club. He’s a gift for us. He’s special.he played against (Paul) Pogba, (Ander) Herrera and after that (Michael) Carrick.”

While there are no guarantees about Foden cracking the City XI in the short-term, particularly with their summer investments continuing apace, he has already done enough to earn extended exposure to the senior squad.

“He’ll stay training with us and maybe in the season stay with us,” added Guardiola.

The Stockport-born prospect admits he has yet to fully appreciate the magnitude of his experience but is already hoping for another chance in City’s next game against Real Madrid.

“It hasn’t sunk it, it doesn’t feel real playing against players like Pogba. I’m only 17,” he told www.mancity.com.

“I’d like to thank Pep for trusting me in a massive game like this, it’s a dream come true. He’s such a great manager and I’ve learned a lot from him.

“Hopefully I’ve impressed Pep and hopefully he gives me the start if he believes in me again.”

As a growing teenager he cut a diminutive figure lining up against a United side known for their physical attributes, but Foden was unconcerned about measuring up.