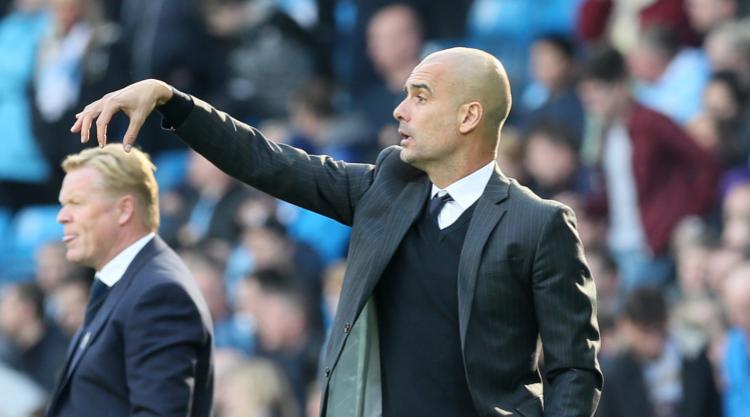 Pep Guardiola has no intention of changing his tactics to throw rival boss Ronald Koeman when Manchester City host Everton on Monday.

City manager Guardiola is good friends with his Everton counterpart having played alongside him for Barcelona in the 1990s.

Koeman this week spoke of his admiration for the style in which Guardiola’s sides play but he will look to exploit their typically high defensive line by attacking the space behind it.

Guardiola is unconcerned about that and is focusing only on his own gameplan ahead of his side’s first home Premier League match of the season.

The former Barcelona coach said: “It’s not a secret. I have been a manager for years and I don’t have to announce to all the managers in the world about the space in behind. They know that.

“Even in the final of the Champions League there was a lot of space. I am not going to change.”

The Etihad Stadium clash pits together two of the most talked about sides of the summer. Both have invested heavily in new players with City spending more than Â£200million in the hope of regaining the title and Everton splashing out around Â£130million in an attempt to break into the top four.

Guardiola said: “They are a top squad and they have important players. They lost an important player, (Romelu) Lukaku, but they have a good group of players – midfield players and strikers. They are one the best teams in the Premier League, I am pretty sure of that.”

Everton ran out 4-0 winners last time the sides met, at Goodison Park in January, and Guardiola anticipates much of the same forthright approach from the Toffees.

He said: “I expect they will play the same way and attack our defence. Sandro (Ramirez) and (Wayne) Rooney are used to playing in that way.

“They have a strong defence. They have great players and are dangerous on the counter-attack.”

Left-back Benjamin Mendy, one of City’s five major summer signings, is not yet ready to make his debut as he completes his recovery from a thigh injury. The Frenchman is now involved in training but the fixture comes too soon.

Midfielder Ilkay Gundogan is also close to returning from the knee injury suffered last December. He played a small part in a friendly at Girona in midweek but is not quite ready for first-team involvement.