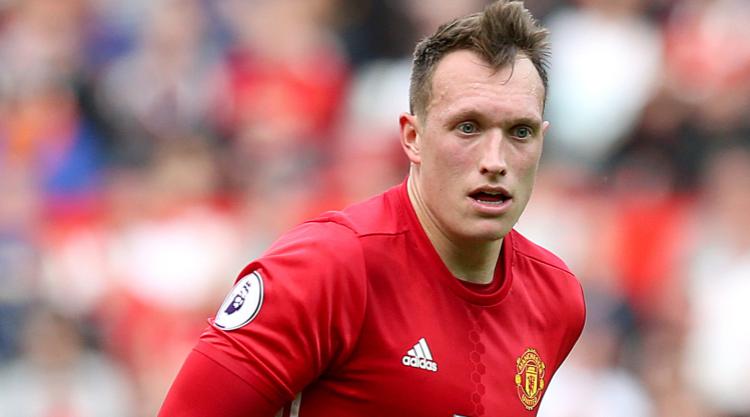 Phil Jones was once tipped by Sir Alex Ferguson to become Manchester United’s best ever player – comments met with a smile and trip to Nando’s by a level-headed defender now determined to make up for lost time.

Still only 25, the centre-back has enjoyed the highs of Premier League glory along with the lows of time on the sidelines due to injury or falling out of favour.

Jones has lost a grip on time since swapping Blackburn for Old Trafford, admitting it feels longer than six years, but the defender is feeling as good as ever.

“It’s weird, I feel like I have still done a lot at United, I still feel like have developed as a player,” he said. “I feel like I’ve grown into myself, if you like, and I’ve seen a lot of faces come and go.

“Some people say in pre-season ‘he might go here, he might be going there’, then you look at all the faces that have gone and you think to yourself ‘I can’t be doing too bad if I am still here at the best club, one of the best clubs in the world?’

“I have won the Premier League, the Europa League, albeit I was on the bench in the final, I have been involved in big games in the Champions League.”

But Jones knows he has yet to fulfil his full potential and, while confident of kicking on, it is unlikely he will ever become fulfil Ferguson’s prediction of perhaps becoming United’s “best ever player”

“At the time you are young and you just read the comments, but it just goes straight over your head, you’re not interested,” the defender said, with a smile.

“Four, five years ago, whenever it happened, you think ‘oh, that’s good’ and you go out to Nando’s with your mates.

“The manager says nice things but I don’t like to sit there and think ‘that’s nice’ because football is a very, very strange game.

“You can be up there one minute and you be down there the next.

“You have just have to – it sounds stupid – take each day as it comes and every day is a different day.”

Ferguson is one of only three managers Jones felt he had the belief of during his career, along with Sam Allardyce, his manager at Blackburn, and current United boss Jose Mourinho.

The 25-year-old has started all three Premier League matches this season under the Portuguese, who believes Jones has “potentially everything I like in a central defender”.

“I have obviously seen them and it’s nice to hear that from the manager, but I am under no illusions,” Jones said.

“It’s a long season ahead and things can change very quickly in football and I need to keep doing what I am doing, not just in the games but in training as well.”

The fact Mourinho’s comments came with the caveat of keeping him “safe from injuries” underlines Jones’ problems in recent years.

A string of issues has restricted the defender to 113 league starts in his six years with United, while he has just 21 caps to his name ahead of England’s World Cup qualifiers against Malta and Slovakia.

“I get that people are going to talk about it,” Jones said of his injuries.

“Obviously it looms over my head the whole thing, but I just concentrate on doing what I do best and that’s playing football.

“Everything is nice at the moment. I’m in a good place and I just want to keep going.”

Jones will now hope to be protected by the guardian angel inked onto his right arm, with the tattoo featuring, among other things, an image of him as a child playing football and a compass to remind him of his roots.

Such grounding means the defender truly appreciates his time with United – a club he never felt the need to leave, despite being frozen out by Louis van Gaal not so long ago.

“When times are tough, I am not one for just chucking the towel in and saying ‘that’s me, I’m done’,” Jones said. “It was difficult towards the end of the second season under Van Gaal.

“Sometimes your face fits, sometimes it doesn’t – that’s football, that’s in every walk of life, that’s just the way things are.

“I took it with a pinch of salt and made sure that I could get myself in the best possible shape I could.

“I had a good pre-season and I always said to myself that if I can be strong, be mentally strong, I would have a chance under the new manager and thankfully he has given me that.”