Police investigating a deadly stabbing in Peckham are offering a £20,000 reward for video footage of the brutal attack.

The Met Police said a crowd of up to 70 people are thought to have been present as Bilal Kargbo was stabbed to death in Peckham Rye on April 28.

The 26-year-old, from south London, was killed in broad daylight during an argument with a stranger, and detectives said people were seen filming at the time.

Paramedics rushed to the scene but could not save Mr Kargbo.

He died in the street less than 250 yards from the phone shop where he worked on Rye Lane.

The family of the father-of-three said: “Please think of the trauma and hurt caused to our family. 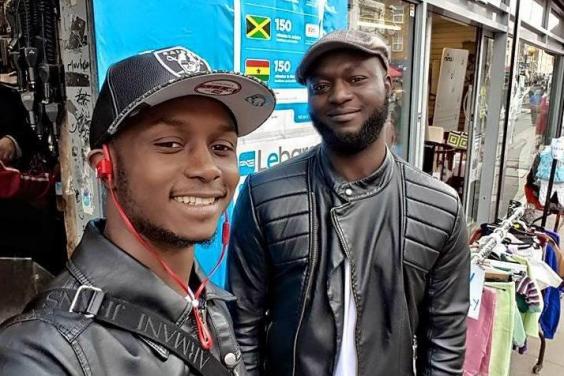 Good friends: Bilal Kargbo, left, died in front of Alim Komora who he had known since he was 11 (Alim Komora)

“Our family is absolutely devastated with Bilal’s loss; he was a wonderful father, partner, son and friend.

“Bilal meant so much to us and it is heart-breaking to know that we will never see or speak to him again.

“It is hard to put into words the suffering that this has caused our family and it will take a long time for us to come to terms with what has happened.”

Detective Inspector Jason Grafham said: “Our inquiries have led us to believe that a large crowd gathered around the altercation Bilal was stabbed during – a crowd of around 60 to 70 people.

“Crucial to our investigation, the inquiry team believe a number of people recorded the attack on their mobile devices.

“Therefore we are now offering a reward of up to £20,000 for video footage that would assist and ultimately lead to the conviction of the person or persons responsible.”