Police seized a father’s £150,000 after it was taken for a spin by the man’s son while he was away on holiday with his wife.

The 28-year-old driver was spotted heading into a petrol station by two officers out patrolling the streets of south-east London on Wednesday.

They discovered the black sports car had been “borrowed” from the driver’s dad, and that he was not covered by his insurance policy on the vehicle, police said.

He was reported for driving without insurance and the Ferrari California, which sells for upwards of £154,000, was seized. 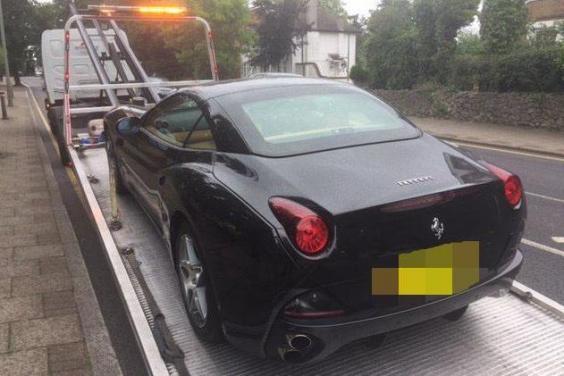 Pictures emerged of the vehicle after it had been lifted onto the back of a tow truck following the incident in Bromley at about 9.30am.

It was unclear if the man’s parents have returned from their holiday, or if they are even aware.

A spokeswoman for Bromley’s safer transport team said: “It transpired that the driver had ‘borrowed’ it from his dad whilst his parents were away on holiday.

“Insurance checks came back showing that he was not covered by his family’s insurance policy on that car.

“As a result the driver has been reported for driving without insurance and police seized the car.”