Thousands of people gathered in central London as the annual Pride parade got underway on Saturday afternoon.

More than 26,000 people have taken to the streets, part of about 300 different groups, in the biggest march in the event’s 45-year history.

The 1.4 mile route began at 1pm in Portland Place, and passed through Oxford Circus and Regent Street, before ending at Whitehall.

Meanwhile crowds of about 1 million people dressed up as a colourful procession of floats, performers and dance troupes made their way past some of the city’s landmarks. 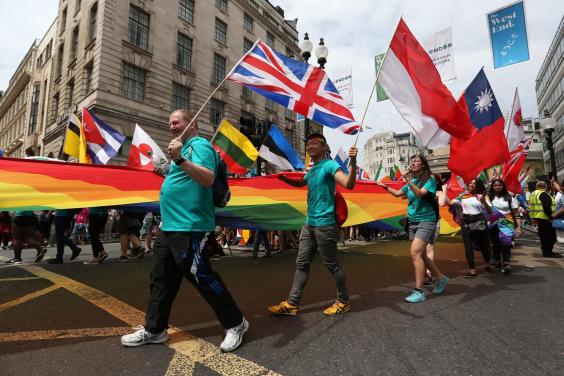 Pride 2017 has seen thousands take to the streets (PA)

Staff from the Metropolitan Police, London Ambulance Service and London Fire Brigade were nominated to launch the parade after helping in response to recent tragic events in the capital, organisers said.

They joined flag bearers representing countries around the world, including those where it is still illegal to be LGBT+.

It comes as some of the transport network’s busiest stations were adorned with the rainbow design for the campaign that champions the rights of the LGBT+ community.

London prepares for Pride 2017 – In pictures

High street shops and pavements have been splashed with the same pattern as Londoners celebrate half a century since homosexuality was legalised in the UK. 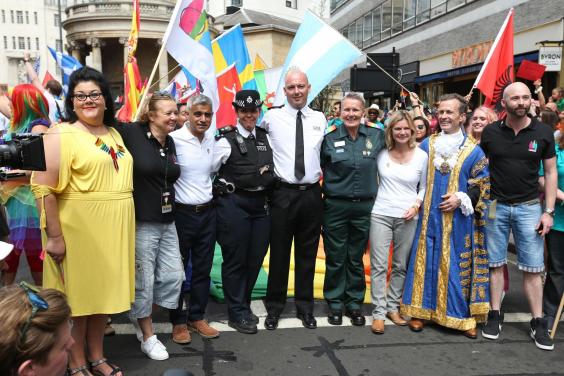 Marking 50 years since homosexuality was legalised in the UK, the theme in 2017 is ‘Love Happens Here’.

The parade has been praised by Theresa May, who said London is sending out a “proud and positive message to the world”.

In a message released ahead of the parade Mrs May, who is currently in Germany at the G20, reiterated the UK’s pledge to encourage other countries to ensure equal rights for all, regardless of sexual orientation, and to take a stand against hate crime at home.

She said: “Around the world, cruel and discriminatory laws still exist – some of them directly based on the very laws which were repealed in this country 50 years ago.

“So the UK has a responsibility to stand up for our values and to promote the rights of LGBT Plus people internationally.

“That’s why we will continue to stand up for human rights, directly challenging at the highest political levels governments that criminalise homosexuality or practice violence and discrimination against LGBT Plus people.

“And here at home too, we must continue to stand up for true equality and respect for everyone, right across our United Kingdom.

“We must stamp out homophobic bullying in schools, and drive down homophobic and transphobic hate crime.”

Labour leader Jeremy Corbyn also released a message for pride and said everyone involved is “playing a crucial part in sending  an uplifting message”.

He also added that the UK still has a “long way to go” to help LGBTQ Plus people regarding cuts to services and hate crimes.

As part of the annual Pride weekend, a rainbow flag will be projected onto the Palace of Westminster for the first time.

Lord Fowler, Speaker of the House of Lords, said the move will demonstrate the UK’s support for those living in countries around the world where people are persecuted for being gay.