Pride in London celebrations are the “best antidote” to the terror and tragedy of recent weeks, Sadiq Khan told the thousands who gathered for the parade.

The Mayor of London’s comments came as he addressed revellers in Trafalgar Square, telling them year’s event was the biggest ever.

Emergency Services crews who helped in the aftermath of the recent terror attacks and the Grenfell Tower fire launched the March on Saturday.

Staff from the Metropolitan Police, London Ambulance Service and London Fire Brigade were nominated to take part after helping in response to terrorist atrocities and the Grenfell Fire disaster, organisers said.

They joined flag bearers representing countries around the world, including those where it is still illegal to be LGBT+. 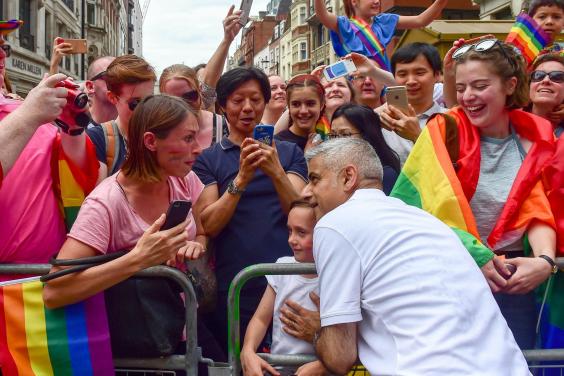 Mention of the DUP, who the Conservative Government struck a deal with following the general election, drew boos from the crowd.

Mr Khan warned that the arrangement with the Northern Ireland party, which is anti-gay marriage and anti-abortion, would not change the status quo in London.

To applause, he said: “You [the Government] may have done a deal with the DUP but there will be no backtracking on LGBT+ rights.

“There will be no backtracking on women’s rights.”

More than 26,000 people are estimated to have taken part in the parade which began north of Oxford Circus on Regent Street, watched by a crowd expected to number around one million.

The parade, taking a 1.4-mile route through the city, comes after what is believed to be the world’s largest Pride festival, with over 100 events having taken place since Saturday June 24.

The march is also marking 50 years since the Sexual Offences Act 1967, which decriminalised homosexuality in England and Wales.