This is the moment an on-duty policeman took some respite from patrol to play a guitar solo for revellers at the Pride in London parade.

Footage from the event captures the officer showing off his musical skills to cheers and applause from a crowd gathered around a street band.

The hilarious moment, in the Strand, just off the parade’s 1.4 mile route, came as thousands descended on the capital for the annual event.

The policeman was one of many emergency service workers who joined revellers for the parade on Saturday afternoon. 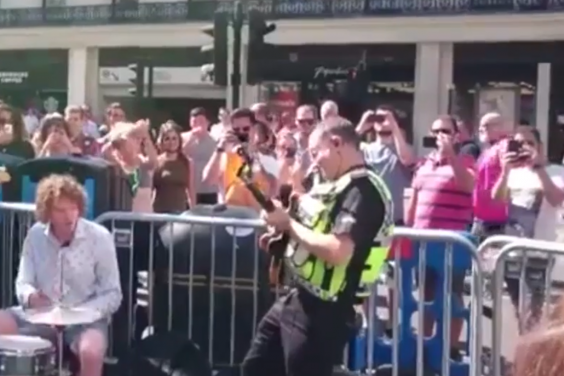 Pride 2017: An on duty police officer stops to play guitar solo at the annual parade (@ispyprettyplcs)

Staff from the Metropolitan Police, London Ambulance Service and London Fire Brigade were nominated to launch the parade after helping in response to recent tragic events in the capital, organisers said.

Meanwhile crowds of about 1 million people dressed up as a colourful procession of floats, performers and dance troupes made their way past some of the city’s landmarks.

The route for this year’s even began at 1pm in Portland Place, and passed through Oxford Circus and Regent Street, before ending at Whitehall.