Prince Charles has struck a commemorative coin to mark the Duke of Edinburgh’s retirement from public duties.

One side of the £5 coin bears the image of Prince Philip and the phrase “Non sibi sed patriae” – Latin for “not for self, but country”, while the other features an image of The Queen.

Charles struck the coin during a visit to the Royal Mint’s factory and visitor centre in Llantrisant in Rhondda Cynon Taf, Wales.

He pressed a gold button before examining the coin, which will be made in silver and gold. Philip has personally approved the design. 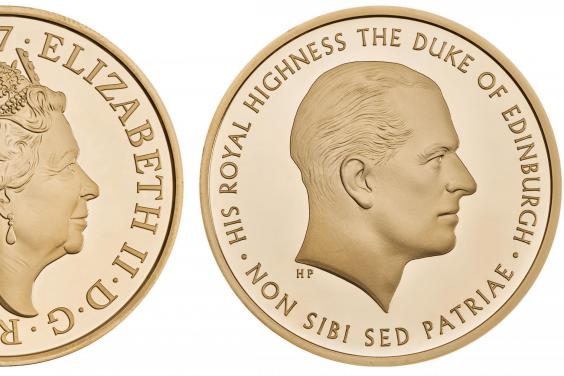 Gordon Summers, chief engraver for the Royal Mint, said: “The image of the Duke of Edinburgh was taken from a prize medal from the 1970s.

“We are already working on a coin for Prince Charles’ 70th birthday, and I showed him the design for it.

“He asked what references we had used. We had a photography session with him about a year ago.

“We did not alter the image of his father, so his father looks younger than him on the coins.

“He did say ‘my father got to choose a younger portrait’.”

Mr Summers said the coins were created using a combination of state-of-the-art and traditional technologies.

During the visit, Charles toured the factory and £9m visitor centre, speaking to staff including apprentices and graduates.