Prince George beams in this adorable new photo released by Prince William and Kate to celebrate his fourth birthday.

The official portrait, taken at the end of June, shows a smiling Prince George, who turns four on Saturday, at Kensington Palace.

He spent the run-up to his big day on an official tour of Poland and Germany with his parents Kate and William and his two-year-old sister Princess Charlotte.

In a statement the Duke and Duchess of Cambridge said they were “delighted” to share the photograph as they prepared to celebrate George’s fourth birthday.

They added “they would like to thank everyone for all of the kind messages they have received.”

The picture was taken by Chris Jackson, Getty Images Royal Photographer, who said: “He is such a happy little boy and certainly injects some fun into a photoshoot.”

William and Kate’s eldest child has a busy year ahead of him as he starts school in September. 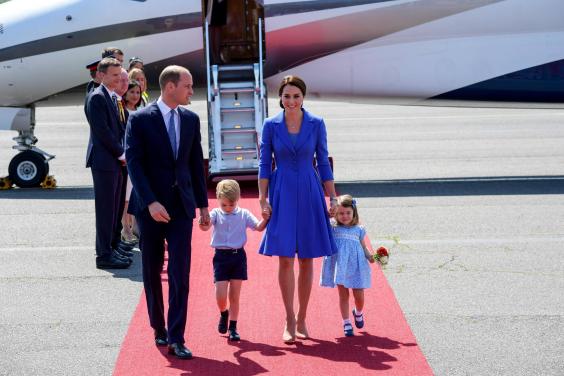 The Duchess has already said she is not sure George, who will be young for his year, “has any idea what’s going to hit him” as he begins full-time education.

The selective establishment states that its most important rule is to “be kind”. Its 540 pupils are aged from four to 13, with around 20 in a class.

Art, ballet, drama, ICT, French, music and physical education are all taught by specialist teachers from a child’s first day in school.

The Cambridge family will be based at Kensington Palace in London, rather than at their Norfolk mansion Anmer Hall, with William leaving his air ambulance helicopter pilot job this summer to become a full-time royal.

George showed himself to be something of a shy royal diplomat when he arrived in Warsaw, needing encouragement from William to exit the plane, and fidgeting on the red carpet.

According to Kate, the prince is a “noisy” youngster and a “really lovely little boy” whom she hopes will keep “feisty” younger sister Princess Charlotte in check.

According to Kate, the prince is a “noisy” youngster (PA)

He made his public debut in front of the world’s media on the hospital steps one day later, wrapped in a white merino wool shawl, cradled in his proud parents’ arms.

A great-grandchild to the Queen, he will be the 43rd monarch since William the Conqueror obtained the crown of England if, as expected, he follows reigns by the Prince of Wales, and then William.