It comes after the Queen and Prince William’s visit to meet survivors and volunteers.

Harry and the Duke and Duchess of Cambridge donated to the Evening Standard emergency fund to support those affected by the Grenfell Tower blaze.

Harry and his brother responded to an appeal by the Evening Standard for their Dispossessed Fund, which is providing urgent assistance to families left homeless by the devastating fire at the West London tower block.

Harry last night made the private visit to British Red Cross volunteers helping to sort through the large number of donations made to the victims of the Grenfell Tower block fire. 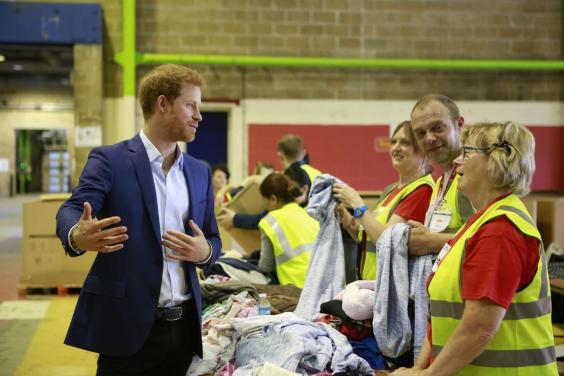 He spent around 50 minutes chatting to workers who are based at a Royal Mail site in Greenford, north-west London, and to Royal Mail staff who have facilitated the operation with the charity.

According to the British Red Cross, volunteers have so far sifted through around 62 tonnes of donations, with 10 tonnes having gone back to those affected in the west London neighbourhood. They include clothes, bedding and toiletries, it said. 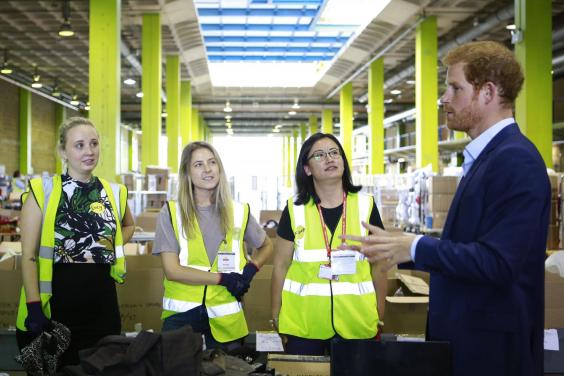 Hundreds were left destitute when a fire ripped through the 24-storey building on June 14, killing at least 80 people.

Adele Hampton, 51, has been volunteering between shifts as an auxiliary nurse, travelling from her home in Kent to help.

She said after meeting Harry: ‘His visit is a boost and recognition – not that we want recognition, we don’t, but for someone in such a position to care enough to take time out to come and see us means a lot.