Prince Harry turned television journalist today as he interviewed an injured army hero about the healing power of sport.

The 32-year old prince, who is more used to being quizzed himself, instead questioned former Army captain Dave Henson about his fightback after suffering horrific injuries serving in Afghanistan.

The serviceman lost both legs above the knee stepping on a mine in Helmand Province in 2011 while on patrol with the Royal Engineers.

But he was walking again within eight months after being fitted with artificial legs – and went on to win a bronze medal for Great Britain in the 200 metres at the Rio Paralympics last year.

He will now be among the competitors taking part in the Para Athletics Championships, which start in London on Friday.

Henson, now 31, told his story to Harry on video hoping it will inspire others, saying taking part in competitive sport had been a catalyst for his recovery. 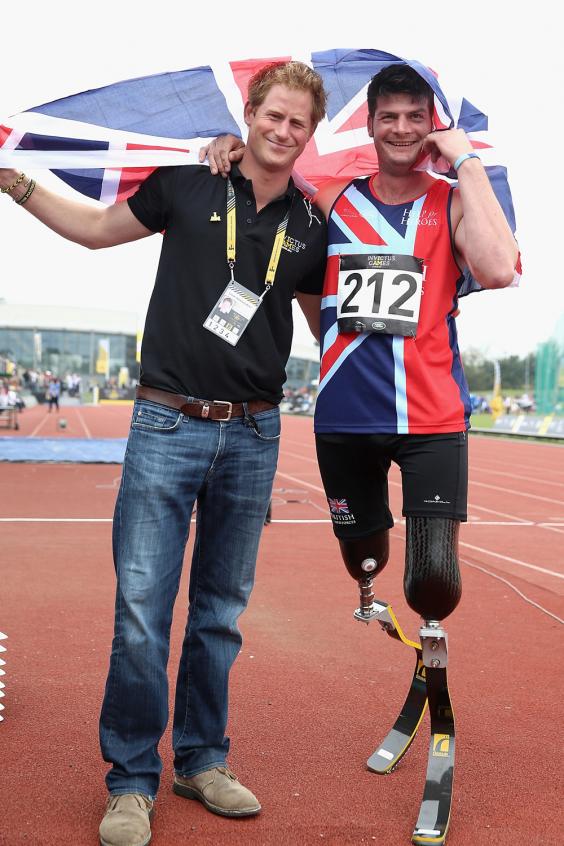 He said, “I was still very early on in my recovery and rehab stage, it was a little bit of inspiration because it was suddenly an exposure to people absolutely smashing sport.

“I went to the Olympic Park a couple of times and it was just such an incredible atmosphere, everyone was so happy.”

Prince Harry, himself an Afghanistan veteran, called on people to support the championships.

He said: “Buy your tickets, get down there, bring your family and friends and come down and support.

“Be there with everybody else, creating that atmosphere that’s going to be a life-changing moment for Dave and everyone else.”

“Spectators will see the world’s best Para athletes compete in one of the world’s most iconic sports venues. Every single member of the GB team, every single athlete that has qualified is an incredible sportsperson.”

The World Para Athletics Championships run from Friday until July 23, and come ahead of the IAAF World Championships at the London Stadium from 4-13 August.

The athletics championships to be staged at the London Stadium since the 2012 Olympic and Paralympic Games, with 30 sessions scheduled across 20 days.

*Tickets for the World ParaAthletics Championships start at just £10 for adults with children’s tickets priced at £5 for every session.

Over half of tickets cost £20 or less and a family of four can enjoy watching a ParaAthletics gold-medal session for just £30. Tickets can be purchased from this link