The public will soon be able to challenge punishments for terrorists if they believe the sentences are not harsh enough.

New changes are set to give victims of crime and ordinary members of the public more power to appeal against the sentences handed to terror criminals in the UK.

Currently people in England and Wales can contest punishments for the most serious terror offences under a process called the Unduly Lenient Sentence scheme.

But new changes will see members of the public now able to challenge sentences for 19 other terror-related crimes.

The Unduly Lenient Scheme came into force in 1988 and covers 19 crimes including murder, rape, robbery and drug offences.

If a person makes an appeal under the scheme, the attorney general may refer the case to the Court of Appeal where it will be reviewed. 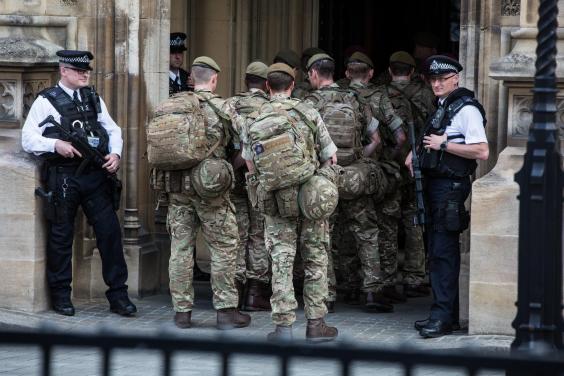 The army arrived in London after the Manchester bombing as London’s counter-terror operation was boosted. (Alex Lentati)

The new changes will see the scheme now include crimes such as encouraging terrorism, supporting certain organisations, sharing terrorist propaganda or not disclosing information about a terrorist attack.

Calls for the ULS scheme to be extended emerged last year after the cleric Anjem Choudary was jailed for five-and-a-half years after he was convicted of inviting support for Islamic State.

The new measure, which was first announced last year, will be formally introduced in a statutory instrument on Monday, before taking effect on August 8.

Justice Minister Dominic Raab said: “We want the most robust sentences for any terrorist crimes and for victims to have every opportunity to see justice delivered.

“Our action will reinforce our focus on deterring people who help radicalise terrorists, and punishing those who wilfully turn a blind eye to terrorist activity.”

In 2015, the Attorney General’s office referred 136 cases to the Court of Appeal, with the Court increasing the sentences of 102 offenders.

The Ministry of Justice said that, while it is right that the public and victims have the right to request a review, this represents a small proportion of the 80,000 Crown Court cases heard each year and shows that the judiciary get the vast majority of decisions right.

Attorney General Jeremy Wright QC said: “The ULS scheme allows victims of crime, their families and the public to request a sentence review if they feel it’s too low.

“Widening the scheme to include terrorism offences will allow us to challenge more sentences and is a welcome first step to extending it even further.

“Crimes of this nature will not be tolerated in our society and those convicted of terrorism will receive the sentence they deserve.”