Protesters demanding ‘justice’ for a 20-year-old man who died after being chased by police officers are set to demonstrate outside an east London police station.

Rashan Charles, from London, has been named locally as the man who died after officers chased him on foot after attempting to stop a car in Kingsland Road, Dalston, in the early hours of Saturday morning.

He ran into the nearby Yours Locally shop where he was seen “trying to swallow an object” before “being taken ill”, Scotland Yard said.

The Hackney Stand Up to Racism and Fascism protest group has organised a ‘JusticeforRash’ vigil outside Stoke Newington police station on Monday evening, saying his death has left members “enormously concerned and angered”.

The protest group said Mr Charles death was the latest in a “seemingly endless list of young black men dying at the hands of the authorities”.

CCTV footage posted online under the hashtag #justiceforRash appears to show an officer restraining a young man inside the shop.

The Independent Police Complaints Commission (IPCC) has launched an investigation into the footage, with a post-mortem examination and formal identification set to take place.

Chief Superintendent Simon Laurence, the Met Police’s borough commander for Hackney, said: “The IPCC has launched an independent investigation to establish what happened and has viewed the officers’ body worn video.

“There is likely to be speculation over the next few days regarding what led to this man becoming ill, so I would encourage people to keep up-to-date with the IPCC’s statements, as and when they are released. 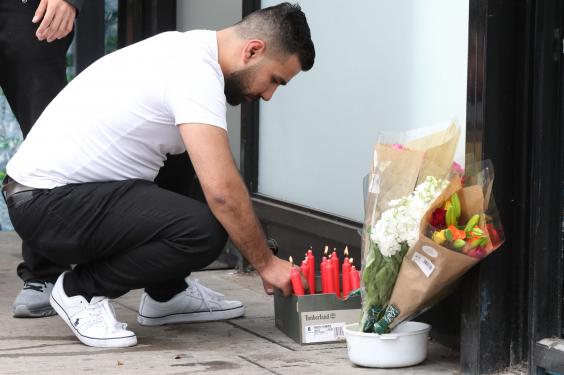 Friends have paid tribute to Mr Charles as a “humble young man” while flowers have also been laid outside Yours Locally.

Erem, who owns the barber shop but did not want to give his full name, said he had seen Mr Charles, known as Rash, about 15 hours before he died.

“He was a humble young man,” Erem said, “he was really known in the area.”

He said the young man knew how to speak to people: “He was very mature for his age.”

“I’m in shock myself,” he said, adding he would often speak to the young man outside his shop.