The family of Rashan Charles, who died in police custody a week ago, has urged calm at a fresh protest in east London.

“Burning down homes will not give justice,” said a spokesman for Mr Charles’s family, who called instead for “dignified” demonstrations.

Their appeal came at a vigil for the 20-year-old amid heightened tensions after protestors threw glass bottles and set fire to mattresses at a protest on Friday night.

Outside Stoke Newington police station on Saturday, Mr Charles’s father Esa joined the family of Edson Da Costa – who died last month, six days after being detained by police – for a vigil organised by Stand Up To Racism. 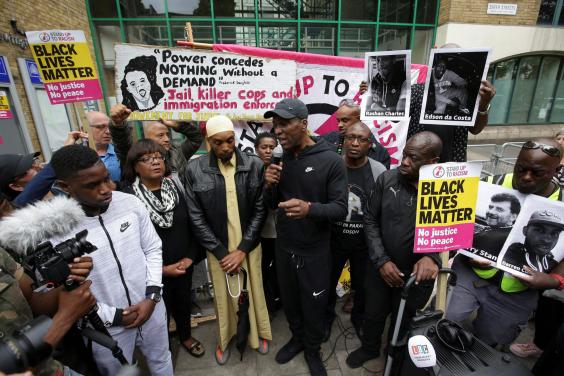 Stafford Scott, who stood next to Mr Charles and spoke on behalf of the family, directly addressed the young people who protested the night before, and said that they understand their anger and frustration.

Shadow home secretary and Hackney North and Stoke Newington MP Diane Abbott told the crowd she felt it was important to attend the vigil to “show her support” for the families and parents of Mr Da Costa and Mr Charles. 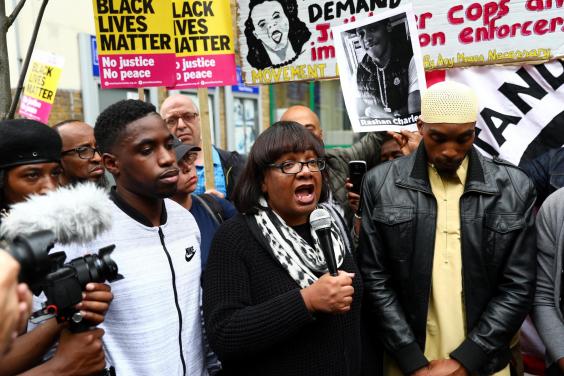 “That is the call that every parent dreads. The call that tells you that your young child has died in those sorts of circumstances,” she said.

Ms Abbott said she agreed with what was said about the “importance of peace on the streets”, and added: “Violence is not the answer.

But “violence is not the answer,” she said, flanked by about 40 protesters carrying banners with slogans such as “No to racism” and “Black lives matter”. 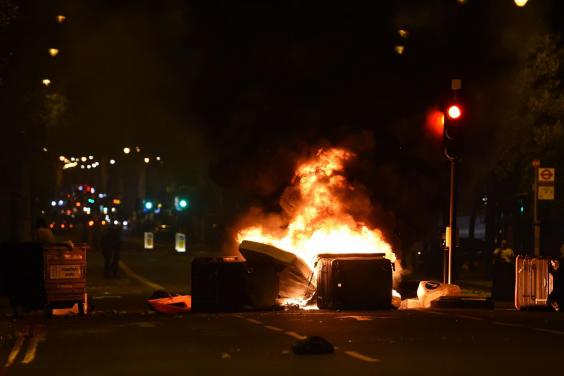 Several wheelie bins and a mattress were set alight on Friday night. (PA)

The shadow home secretary called for calm earlier on Saturday after a protest in east London on Friday night turned violent.

Ms Abbott referred to the “understandable anger” of people in Mr Charles’s community but said demonstrations “must be peaceful”.

A large gang of protesters – many of whom had their faces covered – clashed with riot police as tensions came to a head in Dalston on Friday evening.

The group of masked demonstrators blocked busy Kingsland Road before hurling bottles, stones and other objects at police and starting a fire in the middle of the road. 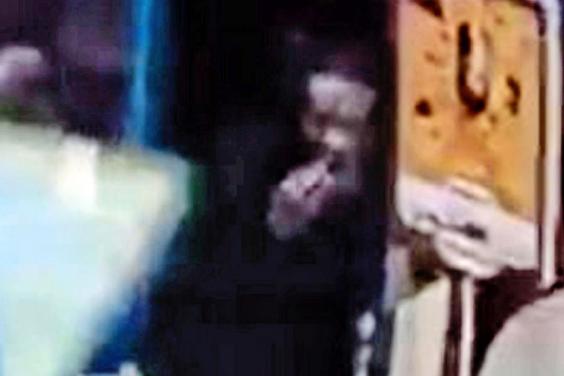 Rashan Charles appears to swallow an object in video footage

Rashan Charles, 20, was chased into a shop by officers in Dalston on July 22.

He was restrained on the floor and later died after apparently swallowing an object and being “taken ill”.

Friday night’s protest turned violent when scores of missiles were launched at police as they attempted to disperse the group.

The Met Police on Saturday warned anybody wishing to use protests as “as an excuse to commit crime” that they would be “dealt with robustly”.