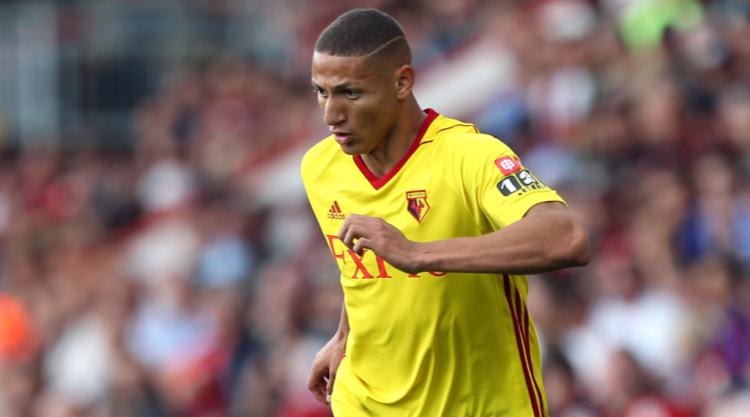 Marco Silva was not surprised to see Watford’s Brazilian winger Richarlison have an impressive full debut at Bournemouth.

The 20-year-old, a summer signing from Fluminense, capped a fine performance at the Vitality Stadium with his first Hornets goal to put them on course for a 2-0 success.

Etienne Capoue’s late half-volley wrapped up the win, earning manager Silva his first victory since taking over at Vicarage Road.

“I don’t like too much to talk about individual players but, of course, I’m happy,” Silva said about Richarlison. “I know very well the player, we analysed the player for the last month and a half before we signed him.

“He’s a talent, it’s easy for you to understand that, but he’s not only a talent. He’s a player who comes every day to work hard, to learn as well. He’s a young boy, 20 years old, his first moments in Europe and he can’t say one word in English.

“It’s the moment to be calm with him, to give time to him as well.

“It’s not a surprise to me what he did today.”

Former Hull coach Silva was impressed by his side’s improved display after half-time and felt they merited the three points.

“I saw a very, very good game, both teams tried to win the game,” he added. “I think everybody in the stadium liked the match.

“Our second half is really very good. They (Bournemouth) play good football normally when they play at home and with this idea of football they put problems for the opposition normally. We controlled very well, put a lot of pressure on them and didn’t permit them an easy build-up.

“And after, we were quality with the ball, we have personality as well and I think we deserved this victory.”

Bournemouth manager Eddie Howe saw his side fail to find the net for the second successive weekend and admitted they have plenty to improve on.

Howe introduced summer signing Jermain Defoe with an hour played, but the England striker had little impact on his first home game back with the Cherries.

“(It was) below our normal standards,” Howe said. “The whole game really, I thought we were off where we need to be.

“I felt it was good chance for us today to win, if we played well. But we didn’t and we turned the ball over far too easily. I think that was probably our Achilles’ heel. Usually we’re very good with the ball but today we were short.

“We know we’re better than that, it’s not a true representation of our ability, so lots of work to do.

“I thought our tempo was slow. We wanted a quick game, we felt that was the best way for us to play, we’re better when we’re quicker but it was too slow again, too methodical and we made it easy for Watford to defend.

“My position now is not to panic and make sure that you don’t overreact but certainly we need to change.”