Thousands of professional and amateur cyclists are set to take to London’s streets today as the capital’s biggest annual cycling event continues.

Major roads will be closed on Sunday as the Prudential RideLondon-Surrey sees participants ride 100 miles through the city and Surrey.

The London marathon for cycling starts in Queen Elizabeth Olympic Park in east London, then follows on closed roads through the south-west of the capital and out to Surrey, before finishing at The Mall.

Later in the day, some 150 of the world’s best cyclists battle it out in the Prudential RideLondon-Surrey Classic – which offers the highest prize money of any one-day race – on a similar route from 1.40pm.

The cycling festival, which first took place in 2013, was created as a lasting legacy of London’s 2012 Olympic Games.

Transport for London has warned there will be severe travel disruption, with various road closures affecting motorists and bus passengers.

A statement reads: “Tube and rail will be the best way to get around central London on the day although some stations around the routes are expected to be busier than usual, especially before and after the cycling events.”

On Saturday, the first day of the three-day event, cyclists enjoyed the chance to whizz around traffic-free central London on an eight-mile route taking in Buckingham Palace, Trafalgar Square and St Paul’s Cathedral. 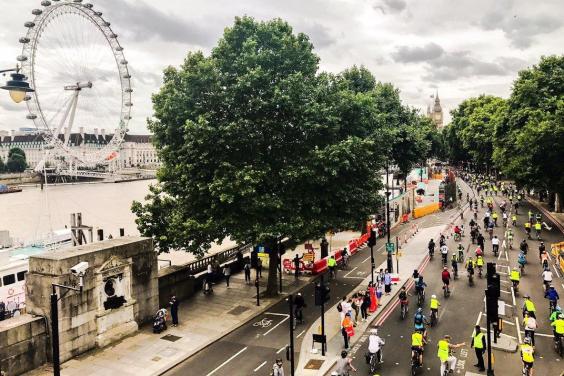 Families, groups of friends and individuals were able to take advantage of the traffic-free streets as spectators lined up to show their support.

Another of the weekend’s highlights, the Prudential RideLondon Classique – the richest women’s one-day race in professional cycling – kicked off at 5pm on Saturday, and started and finished on The Mall in St James’s Park.

The Brompton race took place later, at 7.15pm, featuring eight laps around St James’ Park, past Buckingham Palace and down The Mall.