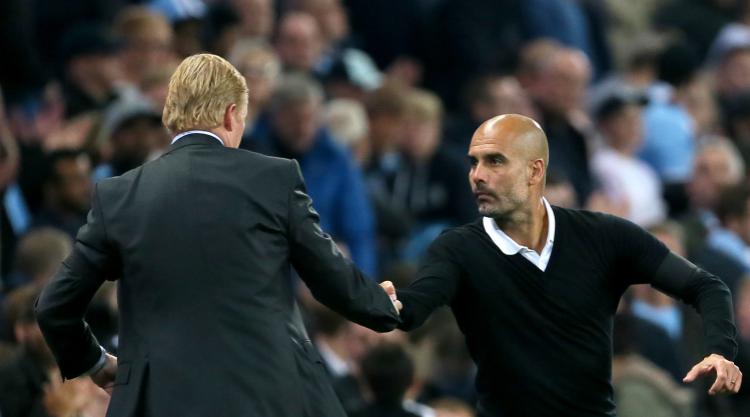 Pep Guardiola and Ronald Koeman both struck frustrated figures after being hit by debatable red cards as Manchester City fought back to secure an entertaining draw against Everton.

An evening that started with pyrotechnics at the Etihad Stadium continued providing fireworks, with former Manchester United captain Wayne Rooney returning to haunt his old foes.

Guardiola’s men responded manfully in the second half and drew level through substitute Raheem Sterling, before Everton’s Morgan Schneiderlin picked up a second yellow late in the 1-1 draw.

“Yeah, we are here for the results, in my case to win games,” City head coach Guardiola said. “We didn’t win.

“We made absolutely everything to win with 11 (players), with 10 against 11 against Everton, a Europa league team, with quality players.

“I prefer to win the game but there’s nothing to say.

“It was quite similar to a lot of games last season. Sad because we want to start good at home but I don’t have regrets.

“We created chances again, a lot. They had one on the target, they scored.

“We were on the table and nothing. It’s just the second game but improving.”

Guardiola was less forthcoming when it came to his thoughts on Walker’s sending-off, having been ruled to have floored Dominic Calvert-Lewin shortly after picking up his first booking.

“You cannot ask,” the City boss said with a smile. “Next question, please.

“I am not going to talk about referees, please. It was so clear so I don’t want to with the referees.”

Guardiola also kept schtum when asked about a conversation with fourth official Michael Oliver, but Everton counterpart Koeman was more forthcoming when it came to his player’s sending-off.

Schneiderlin was booked early in the match for a foul on Sergio Aguero and gave the striker both barrels after another late tackle on the Argentina international earned a second yellow card.

“It’s one side it’s maybe, out of the position of the referee, coming from the back of the player,” Koeman said of Schneiderlin’s sending-off.

“But I was in a good position, in a better position about the second yellow of Walker and in my opinion he played the ball.

“But, you know, away against City, he’s sending off one player of City and a difficult situation.

“You know what the referee will do then, a yellow and his second – it’s red. You can expect that.”

It was a strong comment from Koeman, who claimed not to feel hard done by despite Schneiderlin’s red – or necessarily the result itself.

“No, no, no, I think it was a great match, a lot of intensity and a lot of battles,” the Everton boss said.

“It is Premier League and we know that it’s football and of course you need to stop those tackles, the bad ones. But I didn’t see one bad tackle tonight.

“Okay, but it is a difficult job for the referee.”

He added: “You know even with one less player on the pitch, City is that high-quality team that they will create and they will play.

“They have different options and that made it really difficult.

“It is a good point, happy, we worked hard for that point and, okay, go into the next.”