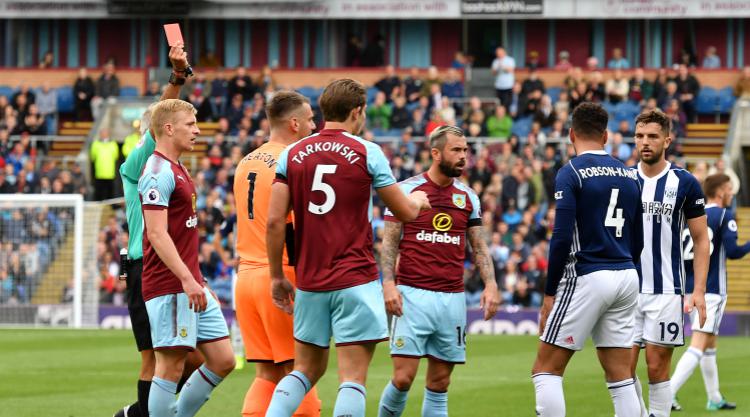 West Brom’s match-winner Hal Robson-Kanu claimed there was no intent to elbow Matthew Lowton in an incident that saw him dismissed in the 1-0 victory over Burnley.

The Wales international became just the fourth player in Premier League history to come off the bench, score and be sent off in a lively 20-minute cameo at Turf Moor.

His dismissal came seven minutes from time when the upper part of his forearm caught Lowton in the head as Robson-Kanu attempted to challenge him for a header in the air, with referee Martin Atkinson immediately brandishing a red card.

Yet Robson-Kanu took to social media on Saturday night to explain the contact was purely accidental.

Writing on his Instagram account, he said: “Ah!! Well done to the boys for seeing the game out, foul wasn’t intentional and hopefully that’ll be seen! Another win, meant a lot to the boys.”

An appeal against Robson-Kanu’s suspension could be lodged by the Baggies, although boss Tony Pulis said after the game that he would need to review video footage before determining anything.

“Obviously he took his goal really well, it was a good goal, and then he’s sent off so it’s obviously disappointing,” Pulis said.

“I’ve not seen it but I will have a good look at it afterwards and then I’ll comment on it. Whether it was or wasn’t, the referee has made the decision so we had to get on with it.

“It was difficult (after he was sent off). He was sent off with seven minutes to go and it seemed like an hour.

“We had to defend for our lives. What Burnley do, they do very, very well and they deserve a lot of credit for it.

“We have had to ride our luck, but the lads have fought and fought all game.”

It is Albion’s best start to a Premier League season and has been achieved without captain Jonny Evans, who was once again absent due to a hamstring problem.

West Brom have turned down a bid from Manchester City for Evans and Pulis reiterated that his omission was simply injury-related.

“Jonny’s not the type of lad, even if Man City were involved, not to play a game of football if he was fit,” Pulis added.

“He’s a smashing lad, I’ve got a lot of time for him and he’s been fantastic for us. This injury came about before Manchester City have made an enquiry.”

Burnley had nearly 70 per cent of possession, a rarity for them, but managed just one attempt on target and were made to pay for their wastefulness by Robson-Kanu.

Regarding his later dismissal, Clarets boss Sean Dyche had no doubt the decision was correct.

“It’s a definite red that has to be given,” Dyche said.

“It’s a late elbow, I don’t think it’s malicious, it’s the flow of the body more than anything, but it’s still an elbow to the face.”

Despite the result, Dyche was upbeat about what he saw from a team that defeated champions Chelsea at Stamford Bridge last weekend.

“I thought it was a good performance,” Dyche said.

“You end up scratching your head that you don’t get something, particularly when you perform so well, other than a smack up pitch that we didn’t deal with really.

“I thought we limited them to very few chances and made a number ourselves. I’m disappointed with the outcome but definitely not the performance.”