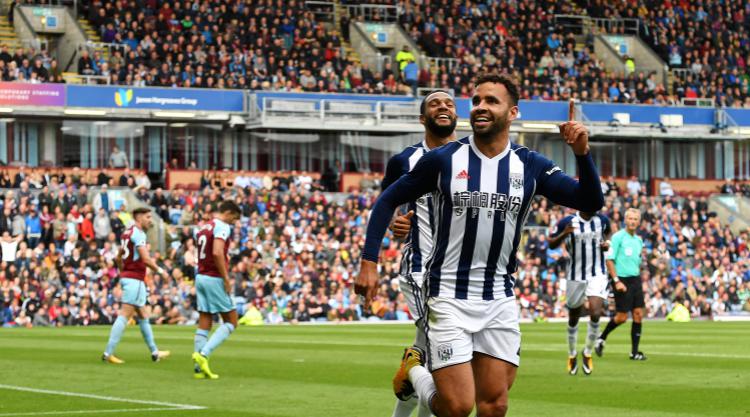 Substitute Hal Robson-Kanu scored to earn West Brom another 1-0 win before being sent off in a lively 20-minute cameo at Burnley.

The Wales international held off two Clarets defenders to net in the 71st minute, but he was then dismissed seven minutes from time when he caught Matt Lowton in the head with his elbow as the Burnley full-back headed clear.

However, it did not cost the Baggies, again missing Manchester City target Jonny Evans, against a wasteful Clarets team who showed why Leeds striker Chris Wood’s seemingly inevitable arrival is so important.

Though there was once more no Evans in West Brom’s team due to injury, Gareth Barry made his Baggies debut and his 629th Premier League appearance, just three shy of Ryan Giggs’ all-time record.

He has joined a team known for their expertise at set-pieces and the first real opening they carved out came from a Chris Brunt corner that was mis-hit by an unmarked Jay Rodriguez at the near post.

They enjoyed nearly 70 per cent possession here and looked far more likely to break the deadlock, with Jeff Hendrick firing a half volley narrowly wide and Johann Berg Gudmundsson curling another attempt off target from a Sam Vokes knockdown.

Albion’s towering defender Ahmed Hegazi, a goalscorer on his debut last week, twice required treatment for a cut on his head and it was a surprise to see him beaten in the air by Gudmundsson as he nodded at Ben Foster.

Another West Brom corner, this one from Matt Phillips’ right foot, almost produced a goal as the cross reached Sam Field, who may have known little about an attempt that came off the back of his head and went over.

Ben Mee had far more control over his headed try at the other end when he somehow directed Robbie Brady’s corner past a post from inside the six-yard box.

The contest was scoreless at half-time, as it was last season when the two met at Turf Moor in May, but there were four second-half goals on that occasion.

Jake Livermore thought he had one here two minutes after the restart when his deflected effort found its way past Tom Heaton, though the flag had been already been raised because Rodriguez had strayed offside in setting up the chance.

Brady was the next Clarets player to steer an effort off target and they were soon punished for their profligacy by substitute Robson-Kanu, who put the visitors ahead eight minutes after coming on.

Brunt’s clearance from the byline was nodded on by Phillips and Robson-Kanu beat Stephen Ward to the flick-on before outmuscling James Tarkowski and staying on his feet to slam his finish beyond Heaton.

Yet the striker went from hero to zero shortly afterwards as his left arm caught Lowton in the head as he struggled to make up the ground to challenge him in the air.

Burnley, who beat nine-man Chelsea last weekend, could not capitalise in the closing stages, though, as Hendrick, Vokes and substitute Jonathan Walters all missed the target.