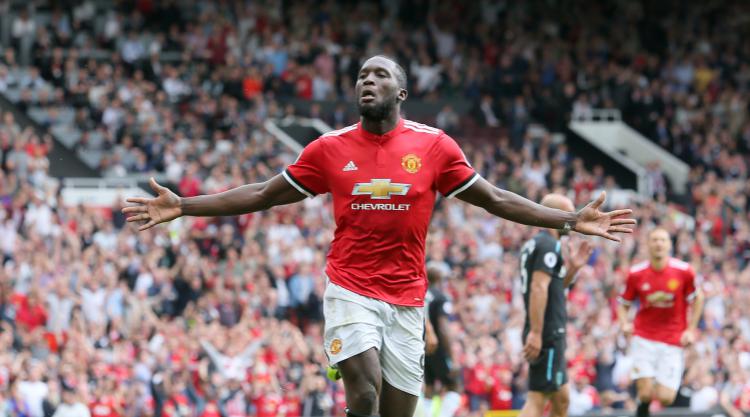 The Â£75million summer signing struck in each half as United justified pre-season optimism with a sparkling and confident display at Old Trafford.

The Hammers were completely outplayed and could easily have trailed by more goals before substitute Anthony Martial and Paul Pogba finally put a more realistic slant on the scoreline in the closing minutes.

West Ham’s former United striker Javier Hernandez was given a good reception before kick-off – a welcome certainly not extended to the visitors’ on-loan Manchester City goalkeeper Joe Hart – but the Mexican had little else to cheer.

He, and his team-mates, were emphatically shut out of the game. United won most of the loose balls and were energetic in possession. Matic was outstanding in midfield, covering plenty of ground and laying the foundation for many of United’s attacks.

Lukaku threatened early with a burst down the left and Henrikh Mkhitaryan had a shot blocked and fired over.

Hart did well to block a Juan Mata effort after the Spaniard had been played in by Mkhitaryan and Angelo Ogbonna managed to hack clear as Lukaku looked to pounce.

Mata then slipped the ball past Hart after being set up by a neat flick from Pogba but again Ogbonna cleared.

It came as little surprise when United took the lead after 33 minutes. Pedro Obiang gifted the ball to Matic and Marcus Rashford raced clear to slide in Lukaku. The Belgian finished decisively by thumping in his shot off a post.

West Ham had a rare chance on the stroke of half-time as Edimilson Fernandes forced David de Gea to parry a shot. Any hopes the visitors had of getting back into the game, however, were dashed early in the second half.

Mkhitaryan clipped in a well-weighted free-kick into the box and Lukaku was gifted the space to power a header past Hart.

West Ham debutant Marko Arnautovic looped a header onto the bar in response but United moved up the gears and threatened to force open the floodgates.

Lukaku was denied a hat-trick by a brilliant block from Pablo Zabaleta and Mkhitaryan forced Hart into a good save after a tricky run.

Rashford then hit the post from distance and Daley Blind saw a shot bounce over.

The third goal finally came as Mkhitaryan teed up Martial with three minutes remaining and Pogba then added a fourth with a curling shot in the last minute.