The Mayor of London Sadiq Khan today praised Londoners for “pulling together in adversity”  as he spoke at a memorial event to mark the 12th anniversary of the July 7 attacks.

Speaking at the 7/7 memorial in Hyde Park, he described the attack – the single worst terrorist atrocity on British soil – as “barbaric”.

But he said Londoners’ reaction to the atrocity had “inspired the world” – and this spirit had been evident again this year following the attacks in London Bridge, Westminster and Finsbury Park, as well as the tragedy of the Grenfell Tower fire.

He said: “We will never forget those who lost their lives on 7/7 – and we honour them again today and they will always remain in our hearts. 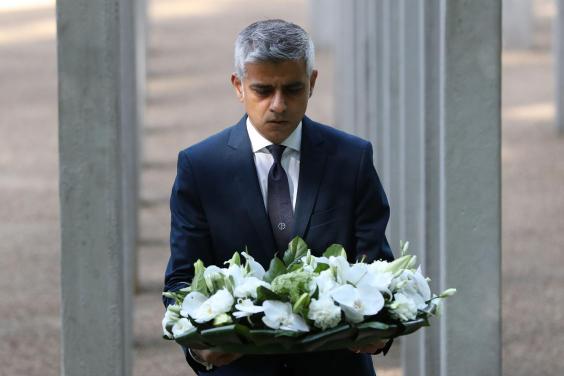 The Mayor hailed Londoners for pulling together in adversity (PA)

“As well as grieving those we have lost, we also pay tribute to the heroic efforts of our emergency services and transport colleagues on that darkest of days.

“The way our city stood together in the aftermath of the 7/7 attacks inspired the world. When Londoners face adversity, we always pull together. 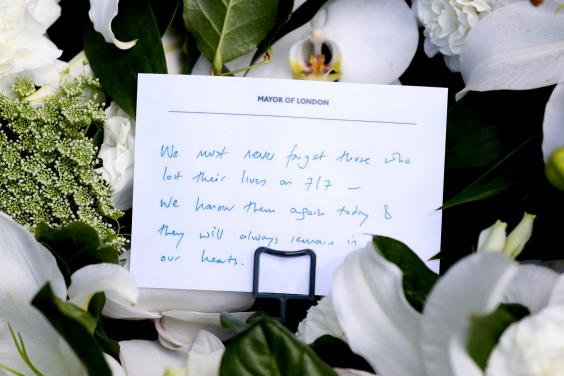 ‘We must never forget’: the note on the memorial (Jonathan Brady/PA)

“We stand up for our values and our way of life. And we have shown this again during the difficult times our city has faced in recent months following the horrific terrorist attacks in Westminster, Finsbury Park and London Bridge, and the Grenfell Tower fire.

“The best way we can honour all those who tragically lost their lives is to ensure that we always stand together as a city, uphold our values and show the world that London will never be cowed by terrorism.”

A wreath-laying ceremony took place to mark 12 years since the attack, when four co-ordinated suicide bombings across London’s transport network killed 52 people and injured over 700.