A Scottish MP shocked her colleagues by flouting Parliament’s usually strict dress code by wearing a Scotland football shirt in the Commons.

Hannah Bardell, an SNP MP, pulled aside her blazer to show off the national team’s shirt underneath during Scotland Questions on Wednesday morning.

She told the Commons her choice of clothes was to show support for Scotland’s ladies team – which is playing England in the Women’s European Championships tonight.

Ms Bardell, MP for Livingston, decision was met with outrage from fellow MPs, with Labour’s Sarah Champion branding it “unparliamentary.” 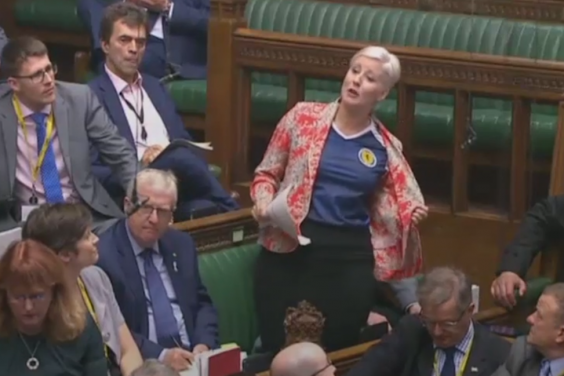 Speaking in the House of Commons wearing the jersey, Ms Bardell said: “‘I would also like to put on record my very best wishes of everyone on these benches for the Scottish football team.

“I’m wearing the colours, I hope you don’t mind. I use to play alongside two of Scotland’s national players at university. Their careers have obviously done better at football than mine.”

In response, Ms Champion told the BBC’s Daily Politics she thought authorities would have “a quiet word” with the Livingston MP.

It comes after a row erupted over whether MPs should be forced to wear ties in the Commons, after Liberal Democrat Tom Brake was called out for not wearing one.

Following this, speaker John Bercow made the decision to relax the dress code and announced he would allow male MPs to speak in the chamber without wearing a tie.