Mr Spicer quit over the hiring of a new communications aide, according to reports.

He told the US president he vehemently disagreed with the appointment of Wall Street financier Anthony Scaramucci as communications director, the New York Times reported.

Mr Trump offered Mr Scaramucci the job at 10am on Friday morning. 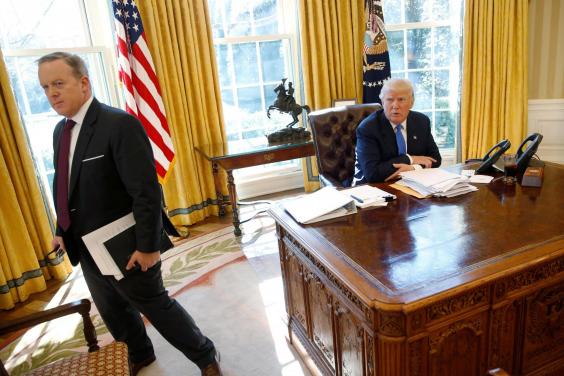 Donald Trump with Sean Spicer, who has resigned from his post as White House Press Secretary (REUTERS)

Mr Spicer is vacating his position just six months and one day after he first stood at the podium and made controversial remarks about the size of the crowd at President Trump’s inauguration.

He held many on-camera White House briefings after taking up the post but he has recently taken a major step back from public view.

White House briefings in recent weeks have been typically held off camera and mostly by his deputy, Sarah Huckabee Sanders.

Mr Spicer has had many controversial moments during his time in the post including when he said Hitler never used chemical weapons and referred to Holocaust “centres”.

He also defended the US President’s infamous “covfefe” tweet by saying it had a hidden meaning.

He was reportedly criticised by Mr Trump for his appearance, particularly his suits, and was the butt of a text message joke by adviser Steve Bannon about his weight.

The search for a new communications director began in May when Mike Dubke resigned from the post.

Mr Spicer has been serving as both press secretary and communications director since Mr Dubke’s exit.