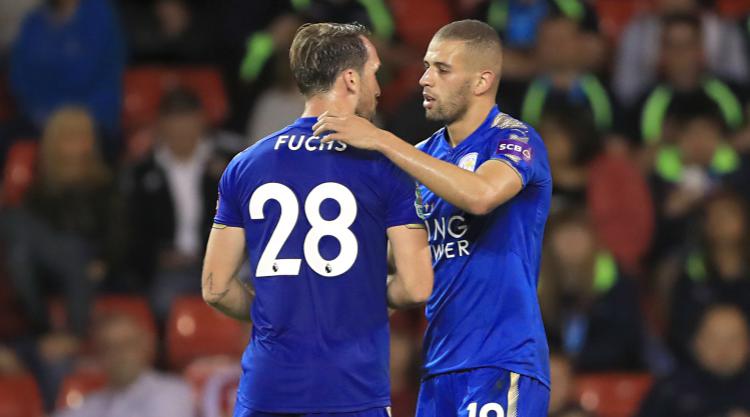 Slimani, who escaped dismissal when going in late on Jake Wright on the stroke of half-time, further angered the home fans by scoring Leicester’s second and third goals at the near post.

Later, the Algeria international thought he had gone one better by scoring a hat-trick but the flag denied him.

England Under-21 winger Gray – linked with Bournemouth – turned his first-half promise into a classy 52nd-minute opener while Ahmed Musa cemented the outcome at the death.

Boss Shakespeare was impressed by the trio and, despite reports that any number of the three could depart the King Power Stadium before the end of the month, he is keen to retain bodies.

He said: “It was important to give the fringe players, or those who haven’t played, some game time and when you do that you hope they’ll respond in the right way.

“They’re part of the squad and they carry on.

“We’ll need everyone as we go along because it’s a tough old season in the Premier League and whether it’s a loss of form, a change of tactics or injuries, you have all that to contend with.”

Discussing how the Foxes turned incision into goals in the second round tie at Bramall Lane, Shakespeare said: “There was more of a ruthlessness in front of goal. I never thought we were ruthless enough before the break but in the second half we came out and scored four which was very pleasing.”

Caolan Lavery’s mishit consolation goal was not the best representation of United’s attacking threat on the night, with David Brooks catching the eye – especially with a devious low drive.

Blades manager Chris Wilder heaped praise on the 20-year-old academy product, saying: “I think you know there was an individual who was a bright spot.

“He’s in good nick. He was just floating about (in the academy) and we had a look at him.

“He’s been knocking on the door and I’ve just got to make sure I manage the boy correctly.”

On United’s capitulation after a positive first half, Wilder added: “A bit naive. A mad 15 minutes.

“We were well in the game but, from being in a great position, within five seconds Gray’s scored and within minutes the game’s done and dusted.

“We’ve been heavily punished and we don’t deserve to go through to the next round.”