A cyclist was thrown over his handlebars after a “mindless” gang of teenagers pushed a bike into his path.

Richard Frazier was part of a group of four cycling in Woodford Green, north-east London, when he was sent flying in the incident.

His friend Nick Harnett also didn’t have time to stop, and hit the road hard, suffering a bad knee injury.

A shocking video shows the moment the bike is pushed out, causing the bikes to clatter into the road.

Mr Frazier and his friends were cycling as part of the annual overnight 120-mile ride from London Fields park in Hackney to Dunwich on the Suffolk coast.

After the crash, Mr Harnett was forced to withdraw from the event.

Mr Frazier told the Standard: “I was sitting on the back wheel of my friend, James, as the group rolled a mountain bike out into the road and directly into his path, forcing him to do the best he could to avoid it. 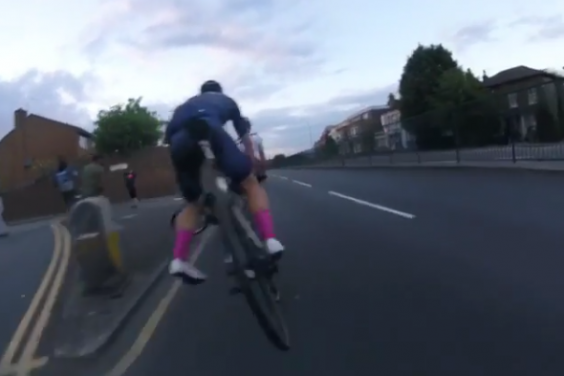 “The next thing I knew I was travelling over the top of my handlebars and towards the concrete. Another friend, Nick, also didn’t have time to stop and hit the ground pretty hard.

“They caused some damage to my bike, ruining the saddle and bending the handlebars out of place, but I was thankful to walk away with just a few bruises and a bit of road rash. 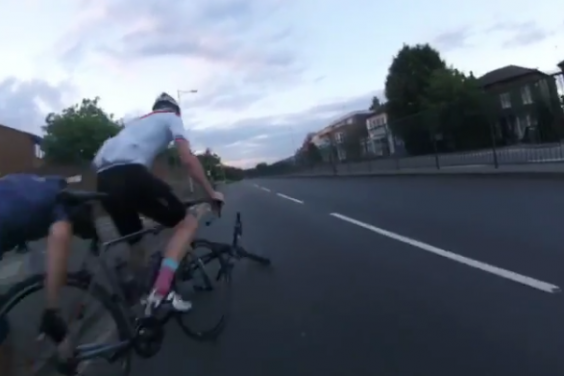 “Nick was less lucky and was forced to head home with damage to his knee that would’ve prevented him riding the remaining 200km we had left to do.”

Mr Frazier added that it was a “ridiculous” and “mindless” act from the group of teenagers.

He said: “They’d clearly been egging one another on all night and the level of one upmanship reached its peak just as we happened to be rolling through.

“We’re just lucky we’d been the last few riders through a set of traffic lights. If we’d have had a bigger group behind us, it could’ve been a far bigger and dangerous crash.”

The Standard has contacted the Met Police for a comment.