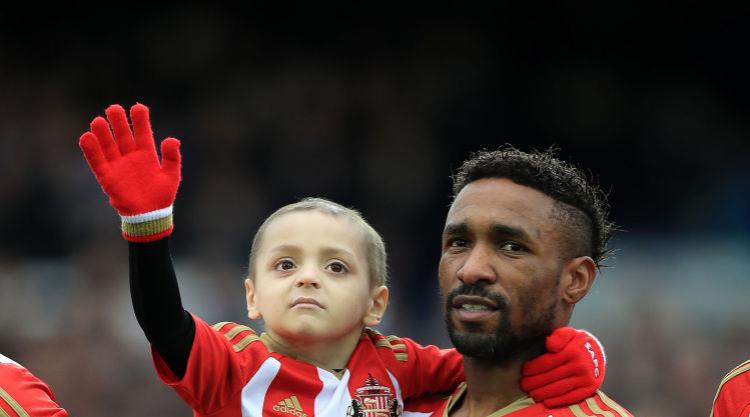 Bradley Lowery, the football mascot whose beaming smile touched thousands of people around the world, has died after a battle with a rare cancer, his family said.

The six-year-old Sunderland fan struck up a close friendship with star striker Jermain Defoe after he was diagnosed with neuroblastoma.

In a statement on the family’s Facebook page, Bradley’s mother Gemma Lowery said: “M y brave boy has went with the angels today 07/07/17 at 13:35, in mammy and daddies arms surrounded by his family.

“He was our little superhero and put the biggest fight up but he was needed else where.

“There are no words to describe how heart broken we are.

“Thank you everyone for all your support and kind words. Sleep tight baby boy and fly high with them angel.”

Bradley and Defoe were pictured snuggled up together at the youngster’s home in Blackhall, County Durham last week after the little boy had a party in bed as a way of saying goodbye.

As Bradley continued to fight for life, Defoe broke down in tears on Thursday at a press conference with his new club, Bournemouth, when he was asked about their special bond.

The Premier League star said: “There is not a day that goes past where I do not wake up in the morning and check my phone or think about little Bradley because his love is genuine and I can see it in his eyes.

Bradley was a mascot for Sunderland several times last season and found a place in the hearts of thousands of football fans around the world.

Supporters of different clubs made banners and chanted his name at games.

He was an England mascot at Wembley when Defoe scored on his return to the Three Lions side.

And Defoe was guest of honour at a huge party thrown for Bradley’s sixth birthday in May.

Supporters had hoped a massive fundraising effort last year could get him to the US for pioneering treatment, but his heartbroken family announced at Christmas that his cancer was terminal.

They kept his many well-wishers around the world up to date by using social media and in his final days, his mother, Gemma, revealed that Bradley’s health was deteriorating quickly.

Scotland and Stoke midfielder Charlie Adam paid tribute on Twitter, saying: “He was a little fighter.”

He wrote on Twitter: “Would love to think @FA and @premierleague could mark @Bradleysfight by way of a trophy or award to commemorate an incredible life.”