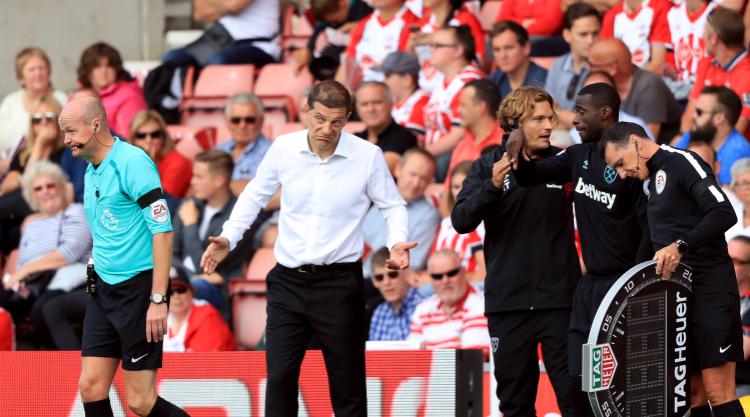 Slaven Bilic praised West Ham’s spirit after their resilient display in the 3-2 defeat at Southampton, despite being “gutted” a stoppage-time penalty cost them a point.

They are bottom of the Premier League having also limply lost 4-0 in their their opening fixture of the season at Manchester United, but while down to 10 men had impressively fought back from 2-0 down to almost draw at St Mary’s.

Marko Arnautovic’s first-half red card for a reckless elbow on Jack Stephens had left them a man down from the 33rd minute, by which point Manolo Gabbiadini had already given Southampton the lead.

It was Charlie Austin, in the first minute of second-half stoppage time, who scored beyond Joe Hart from the penalty spot after Pablo Zabaleta and Jose Fonte had brought down Maya Yoshida, but Bilic said: “We lost a point but gained a lot of things after the Manchester United game.

“Great team spirit; character; we didn’t give up, and showed quality to play with 10 men for such a long period of time. It’s extremely hard, especially when you’re one down.

“We spoke at half-time and they responded in the best possible way to what we asked of them. I’m gutted, but we gained a lot of things from the performance.

“Yes, of course (Arnautovic apologised in the dressing room). It’s hard to play for 10 men for such a long period of time.

“We knew what we were getting with Hernandez: a really great player, great character, team player, really enthusiastic. You’re expecting goals from him, but it wasn’t only the goals.

“At half-time I asked him to be on the left wing, to track back with (Cedric) Soares, and he did that brilliantly. On top of the goals, his determination; he sacrificed for the team in the best possible way.”

Their club-record signing Arnautovic may yet receive a lengthier ban than the standard three matches given for a straight red card, and he wrote on Instagram: ” I want to apologise to all the West Ham fans.

“Just want to let you know I didn’t want to let my team down and you fans. So please, sorry. A big apology to all of you.”

Gabbiadini’s composed 11th-minute finish had ended Southampton’s six-game goal drought at their home stadium, but they struggled to convince, and their new manager said they had to learn to cope with the physicality West Ham provided.

“After the second goal we were a little bit relaxed but not in terms of concentration, in terms of trying to be more clinical to score the third one and try to kill the game.

“When you give the opponent some opportunities like today you will be in trouble and this is something we have to improve.

“I haven’t seen the replay (of the key decisions) and sometimes when the referee (Lee Mason) makes a decision you have to respect them. When they are for you you are happy; when it’s against you have to suffer and to keep going.”