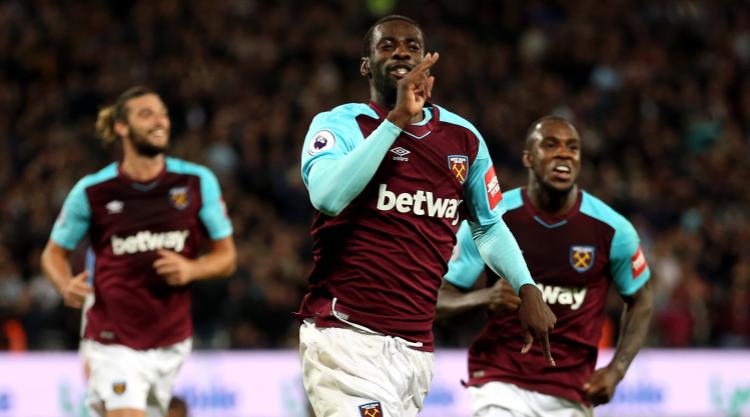 Slaven Bilic got the birthday present he so desperately needed as West Ham hauled themselves off the foot of the Premier League table with a 2-0 victory over Huddersfield.

Second-half goals from Pedro Obiang – thanks to a huge deflection – and Andre Ayew secured the Hammers’ first league win of the season.

Victory came as a huge relief to manager Bilic, who must have feared he might go the same way as Frank de Boer at Crystal Palace had his side lost their fourth straight game.

Instead it was a happy homecoming for the Hammers, playing their first game of the season at the London Stadium, and a happy 49th birthday for the boss.

West Ham have endured a turbulent couple of weeks even by their own standards, with the club in dispute with Sporting Lisbon and Bilic at odds with his own chairman David Sullivan following a chaotic deadline day.

Bilic even had to deal with one of his own players, Diafra Sakho, making a break for freedom when he took himself to Rennes for a medical.

That escape bid failed so Sakho was on the bench while Andy Carroll returned from his latest injury lay-off to make his first appearance since April.

Bilic had said in the build-up his side needed to go back to basics and they certainly did that, aiming for the big frontman at almost every opportunity.

Nevertheless, Carroll gave the crowd an immediate lift after 60 seconds when he drove the ball across goal to the far post, where Cheikhou Kouyate just failed to get a touch.

Michail Antonio, another who missed the start of the season through injury, was back to his menacing self and intent on giving Town left-back Chris Lowe a tough night.

West Ham should have gone ahead when Antonio darted past Lowe and crossed low to Javier Hernandez, but the Mexican frontman lifted his shot onto the crossbar.

Meanwhile Liverpool fans, infuriated by Sadio Mane’s weekend dismissal, will have no doubt noted West Ham captain Winston Reid escaping without a card for his high boot into the face Steve Mounie.

Huddersfield, rarely out of their own half before the interval, managed their first shot on target nine minutes into the second half, Joe Hart getting down well to hold Philip Billing’s low drive.

And the nerves were beginning to jangle for the hosts when, in the 72nd minute, they got a huge slice of luck, and one which should keep Bilic in a job for now.

Obiang picked up the ball 25 yards out and hit a speculative, to say the least, shot towards goal.

Town keeper Jonas Lossl would almost certainly have had it covered until it looped off the back of Mathias Jorgensen and crept inside a post.

Five minutes later Ayew, summoned from the bench in place of Hernandez, snaffled the second from a goalmouth scramble.

Tom Ince rattled the crossbar late on for Town, but West Ham held out to get their season up and running, thus giving Bilic some breathing space.