The Duke and Duchess of Cambridge, already shattered by their visit to a Nazi concentration camp in Poland, paid their respects at Berlin’s memorial to the Holocaust today.

William and Kate went to the Memorial to the Murdered Jews of Europe, a huge sculpture evoking a graveyard in the centre of the German capital.

The royal couple walked through the memorial after touring an underground museum which tells the story of the extermination of six million Jews.

Leon Schwarzbaum, 96, told them about life in the concentration camp, where his parents were killed, and showed them pictures of his lost family. 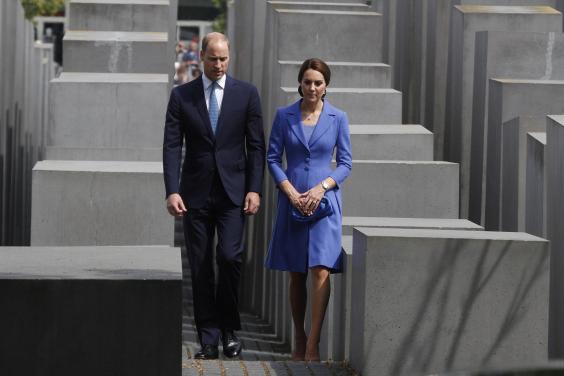 “That’s me at four years old with my family and my mother and father, all dead. Killed at Auschwitz,” he said.

Mr Schwarzbaum, who was born in Hamburg but emigrated to Poland before the war, spent two years at Auschwitz from the age of 21, working as a runner for the camp commander, his pace and strength perhaps saving his life.

William and Kate asked him numerous questions about his time there. 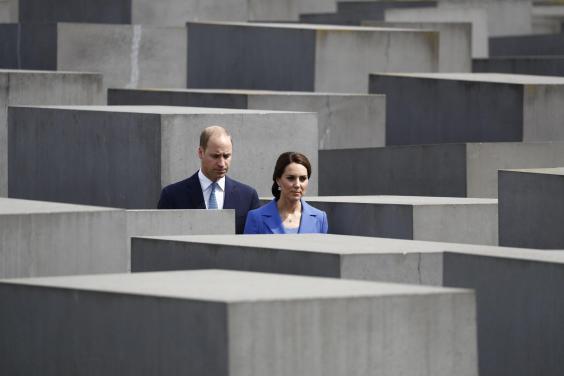 William and Kate walking through the memorial. (AFP/Getty Images)

He showed them pictures of the bunks crammed into each hut. Kate asked him: “How many people slept in each bunk?”

“Six, six, and six, he replied, pointing to a row of three bunks.

He told the couple about the smell of burning bodies pervading the camp from the crematorium. “This was the chimney,” he said, showing them a picture. “You could smell the chimney throughout the whole camp. It was a terrible smell.”

The frail survivor, who was liberated by American troops while on a death march near Berlin, lived in the US after the war but returned to settle in Berlin. He said it had taken him a long time to begin to talk about his dreadful experiences but he had started giving talks about 10 years ago in an effort to educate young people.

“I didn’t speak for a long time after the war, he said. “Ten years ago. Very late.”

“That’s a very brave thing to do,” Kate told him.”Did it feel good to talk about your experience?” the duchess asked him.

“I see that young people want to know what was done at that time,” he said.

William asked him about his thoughts on the Nazis now after all these years.

He replied: “They destroyed my life. I wanted to study but I couldn’t study because the universities had been closed and the schools had closed. They took my jewellery and everything, my family.”

The Duke and Duchess, who admitted that their visit to Stutthof concentration camp on Tuesday had been “shattering” thanked him for talking to them.

They emerged from the underground museum into the sunshine and walked through the memorial, designed by American architect Peter Eisenman and opened in May 2005 to mark the 60th anniversary of the end of the Second World War.