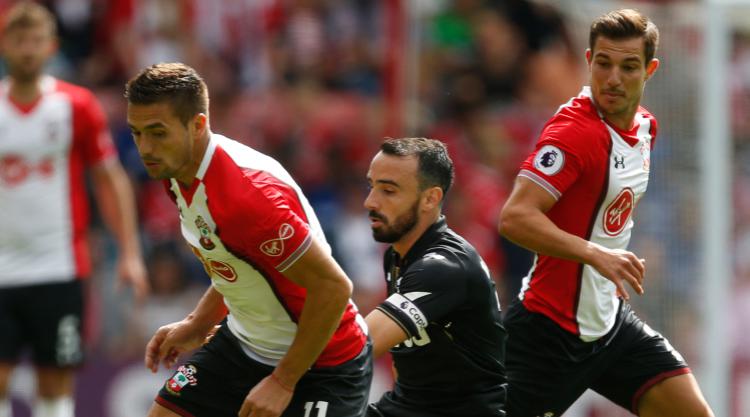 Southampton’s goal drought at St Mary’s stretched to 545 minutes as they laboured to a frustrating Premier League stalemate against Swansea.

Saints wasted a host of chances to open their new campaign with a galling 0-0 draw against the insipid and limited visitors.

Mauricio Pellegrino’s side dominated virtually from start to finish, but lacked the killer instinct needed to clinch the three points.

Southampton have still not scored at home since the 3-1 league win over Crystal Palace on April 5. So despite a new manager, a fresh influx of players and a new season, this was the same profligate Saints.

Nathan Redmond and Ryan Bertrand combined to lay on scores of openings for their team-mates, but James Ward-Prowse, Manolo Gabbiadini and Dusan Tadic were all found wanting in front of goal.

Frenchman Claude Puel paid with his job in the summer for Saints’ inability to link midfield and attack and convert chances last term.

New boss Pellegrino already appears to have generated more impetus than Puel managed, but the south-coast side were still left to rue opportunities missed.

Southampton threw everything at Swansea and should have held a comfortable lead at the break.

Despite that dominance, however, the hosts were unable to break the deadlock.

Tammy Abraham should have scored from a free header, but instead nodded wide from what was Swansea’s sole chance of a disappointing half for the visitors.

Gabbiadini’s flicked header shaved the crossbar as early as the second minute, then Tadic side-footed wide from Bertrand’s cut-back.

Ward-Prowse’s blast was deflected behind by Martin Olsson, then the England midfielder was unable to reach two fine left-wing crosses, both offering potential headers from point-blank range.

Redmond went close from a 20-yard drive, then Swans goalkeeper Lukasz Fabianski produced a good save from Ward-Prowse.

Swansea started the brighter after the break, Abraham conjuring space well only to see his effort blocked. Leroy Fer fired the rebound well wide from a tight angle.

Tadic broke a lengthy spell of monotony with thundering blast that forced a smart save from Fabianski, before Yoshida headed wide with the goal at his mercy.

Tadic then scooped over the bar from 16 yards in yet another example of poor finishing letting down tidy approach play from Saints.

And when Austin fired wide in time added on, Southampton knew their day would end in frustration.