A young man collapsed in the street after being stabbed during a violent brawl in east London, witnesses said.

Police raced to the scene after three men became involved in a fight in the middle of a road in Stoke Newington on Thursday afternoon.

Witnesses said they heard “lots of shouting” and saw the men “wrestling on the floor” in Church Road shortly before 2pm.

Scotland Yard said the victim, believed to be aged in his mid-20s, was taken to an east London hospital. He is in a stable condition with injuries not believed to be life-threatening.

Police said one person has been arrested on suspicion of causing grievous bodily harm. 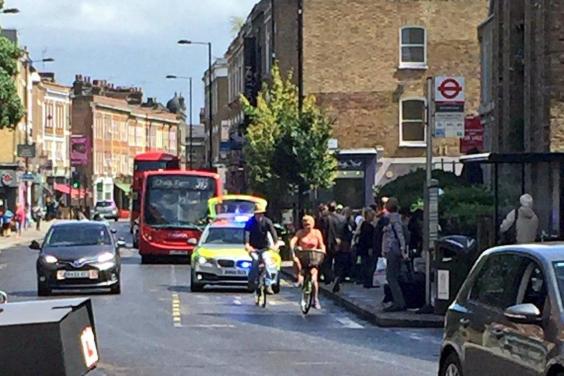 Police at the scene in Church Road, Stoke Newington

Medics from London’s Air Ambulance were also scrambled to the scene.

A witness, who dialled 999 after witnessing the fight, told the Standard passers-by rushed to help the injured victim who lay collapsed in the street.

He said: “I came out of a shop, there were three men fighting in the road, blocking traffic, people shouting.

“Looked like one got stabbed and the other two ran off.

“Victim was lying in the road and onlookers helped him off the road.”

He said he also saw the three men “brawling in the middle of the road, wrestling on the floor” and heard “lots of shouting”.

The witness said a police car and ambulance arrived at the scene in less than four minutes.

Church Road was cordoned off as police swarmed the area following the violence.

A Met Police spokesman said: “Police were called at approximately 1.40pm on Thursday, July 27 to reports of a male stabbed on Church Street in Stoke Newington.

“The man, believed to be aged in his mid-20s, was taken to an east London hospital.