A man and child have been killed after a light plane made an emergency landing on a beach in Portugal, according to local media.

The 50-year-old man and eight-year-old girl were reportedly sunbathing on a packed beach near Lisbon when the plane came in to land.

Police were said to be questioning the plane’s two pilots on Wednesday evening – one of whom had been having a flying lesson.

Some people reportedly ran into the sea. 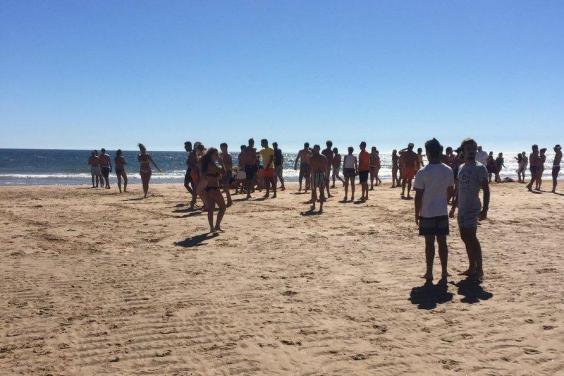 Sunbathers gather in the aftermath of the emergency landing (@omalestafeito)

The small Cessna aircraft appeared to be in difficulty and wobbled as it skimmed low over the sunbathers – scattering them and spreading panic on the beach, witnesses said.

The plane appeared to have a partly broken left wing, which hung lower than the right wing.

The girl who died was with her parents, who were unhurt, witnesses told local television channels.

The nationality of the victims is not yet known and local reports claim they were not related.

There were not believed to be any other injured people.