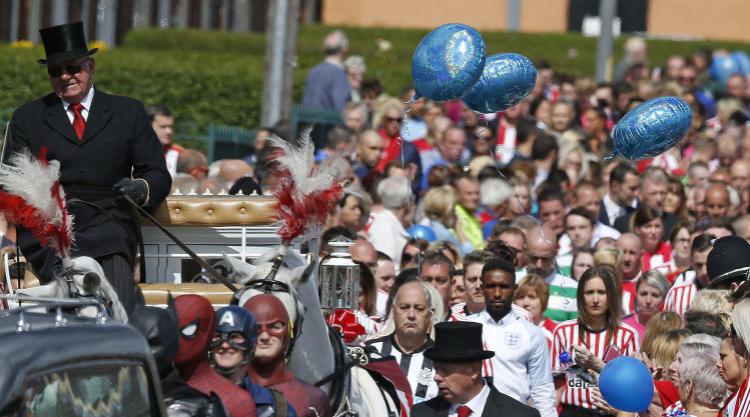 Sunderland and St Johnstone supporters were united as they paid respects to Bradley Lowery during the sixth minute of Saturday’s friendly at McDiarmid Park.

Bradley lost his cancer battle last week and the six-year-old’s funeral was held in his home village of Blackhall, County Durham, on Friday where thousands of people wearing football shirts had lined the streets.

The memorial service was attended by his ‘best friend’ Jermain Defoe, the former Sunderland striker now at Bournemouth, who wore an England shirt.

The youngster’s brave battle against the rare childhood cancer neuroblastoma captured hearts across the sporting world.

On Friday night, Newcastle fans sang ‘ There’s only one Bradley Lowery’ during their friendly at Scottish Premiership club Hearts before the ground broke into spontaneous applause.

St Johnstone had announced a similar planned tribute ahead of Saturday’s friendly against Sunderland, who are now preparing for life in the Sky Bet Championship after finishing bottom of the Premier League.

A post on Sunderland’s official Twitter feed read: ” 6′ Everyone is on their feet in McDiarmid Park with a rousing applause held to remember @Bradleysfight. A nice touch from @St_Johnstone_FC.”

The official attendance of the match was given as 2,032 with 573 supporters from Sunderland.