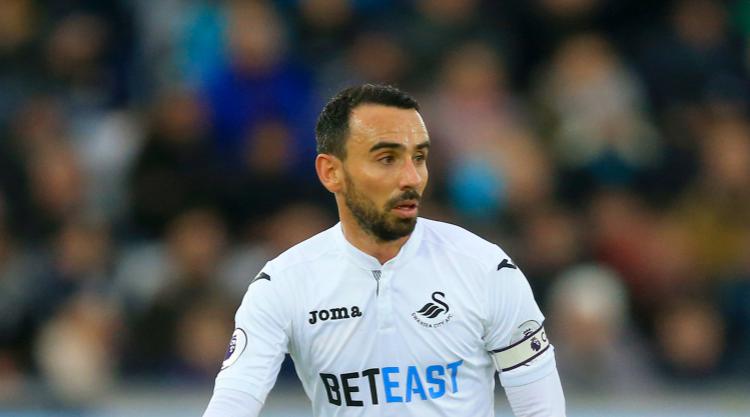 The London-born midfielder, who turns 35 in September, joined Swansea on loan from West Ham in December 2002 before making the move permanent the following summer.

Save for a six-month spell at Sheffield United at the start of the 2010-11 season, he has been with the Swans ever since and has made over 520 appearances for the club.

Swansea say Britton’s new contract is an improved one-year deal, which also has the option of a further 12 months – pending on an appearance clause – and that he also been guaranteed a coaching role within the club once he has finished his playing career.

Britton told the official Swansea website: ” I felt strong at the end of last season. Even when I wasn’t playing I was training well and keeping fit.

“If that wasn’t the case then I would know and I wouldn’t put myself through that. I would make sure I ended at the right time.

“The club has improved my terms for this season, but there is an option where I can have another year if I play a certain amount of games.

“So it’s potentially a two-year deal, but that depends on how many games I play.”

Swansea chairman Huw Jenkins said he hoped the new deal would see Britton remain at the Liberty Stadium for many years.

“He is a model pro and we are very proud to say he is representing Swansea City,” Jenkins said.

“He has made a tremendous contribution to this club, both on and off the pitch, over the last 15 years.

“I hope this new contract paves the way for Leon to remain with us for many more years to come.”

Having been overlooked since New Year’s Eve, he started the last five games which yielded 13 points from a possible 15.

Britton’s influence was also felt off the pitch in the closing weeks of the campaign.

He brought 25 copies of Jack to a King – a film that charts Swansea’s rise through the divisions – to the training ground ahead of a vital home game with Stoke at the end of April.

The message was for the players to realise what the club means to the community – and Swansea duly started their run to survival.

Britton was also responsible for the plan that saw the squad put in Â£70,000 to fund supporters’ tickets for the crucial clash at Sunderland on the penultimate weekend of the season.

Swansea won the game 2-0 and their top-flight safety was secured the following day when Hull lost at Crystal Palace.