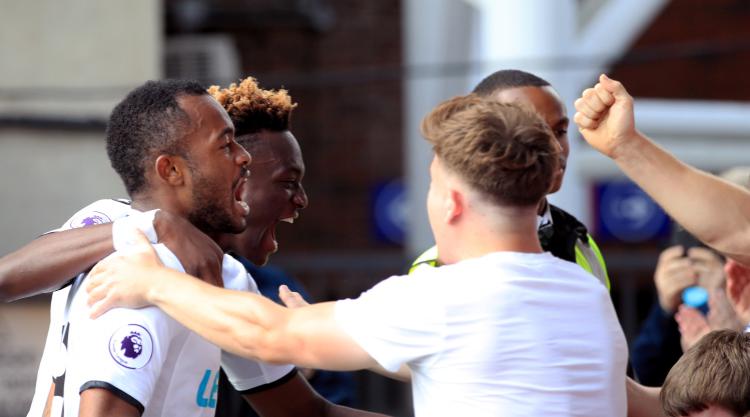 Tammy Abraham – with his first Premier League goal – and Jordan Ayew struck either side of half-time to hand Swansea an opening win of the campaign.

But for Palace this is a worrying start to De Boer’s reign; no goals, no points and no confidence heading into the international break after three defeats.

De Boer wants to change the Palace philosophy and make them a more attractive side to watch, but the adjustment has not been smooth at the start of the Dutchman’s reign.

The two league games between the sides last season produced 12 goals – including an incredible 5-4 home win for Swansea.

But both sides were still searching for their first goal of this league campaign and it was already being billed in some quarters as a relegation battle.

Swansea handed a debut to Â£15million new boy Sam Clucas, while James McArthur came in to the Palace midfield with Ruben Loftus-Cheek nursing a groin injury.

The visitors should have been ahead inside three minutes when Kyle Naughton played Abraham down the right and Ayew headed his cross wide from in front of goal.

Palace were slow to settle but the crowd came to life when Patrick van Aanholt flashed across goal and McArthur went close with a header.

McArthur also rifled a shot past Lukasz Fabianski’s far-post, but both sides were guilty of lacking urgency and any real quality in the final third.

Swansea were almost ahead after 36 minutes as Ayew spied Abraham with a ball over the top.

Timothy Fosu-Mensah seemed to have the situation under control but he allowed the ball to run away from him and Abraham stuck out a foot to force Wayne Hennessey into action, although the effort was going wide.

Alfie Mawson was left unmarked from Tom Carroll’s resulting corner, but the centre-half could not locate the target from six yards.

The half was meandering to a close when Swansea scored with the first on-target attempt of the game.

Leroy Fer swung over a cross and Abraham showed strength to fend off Palace substitute Martin Kelly and finish with a close-range volley.

Kelly nearly made amends when he got above Mawson from a McArthur corner at the start of the second half, but Fabianski gathered on his goal-line.

But there was another moment to forget for the former Liverpool defender after 48 minutes when Naughton dispossessed him and spotted the run of Ayew.

The Ghanaian blocked Hennessey’s attempted clearance and the ball rolled into the Palace net.

De Boer used his three substitutes by the 60-minute mark to try get Palace back in the game and Andros Townsend was a threat when he cut in from the flanks.

Palace upped the intensity levels but were toothless in front of goal and Paul Clement celebrated another victory at Selhurst Park, just like he had done in his first game as Swansea boss in January.